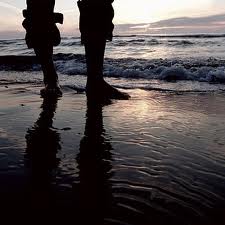 From the Grand Canyon we went to Phoenix, and then to Vegas, and then, through the dry landscape of Joshua trees, to Southern California. Far from where I’d come. But closer to being the person I wanted to be.

We’d been traveling almost three weeks. It was the summer of 1997. I’d just graduated from college and turned down a job at a good newspaper to travel the country, something I’d wanted to do since my parents showed us slides of the trip they’d taken. And I was with Keri, who’d just quit a job she’d hated to become a teacher.

Traveling cross country. A great idea. All you need is some money, a reliable car, and time off. But I always knew I was going to do it because, I think, my parents had done it. Those faded slides. My dad in his Vette; my mom in her pillbox hats; and the Canyon – all in muted hues. I wanted the same experience. Maybe there was too much of that growing up: following directions and the actions of my parents. Maybe not. Being able to wake up and take out a map and say, Let’s go here today, isn’t the worst thing in the world. In fact, I can think of much worse.

We pulled into San Diego late in the afternoon. It was a confusing mess but we followed the sun and found the ocean. We parked the Jetta, put on our suits, grabbed some towels and collapsed on the sand. It had been a long time to spend in a car – the one my parents bought with the money to be used for other things but now wouldn’t be. Even that wasn’t mine.

Until then, aside from trips to Jersey or Boston or Florida, life for me had been in a small part of the Northeast, particularly in houses owned by my parents. Not that there was much to complain about those modest homes my father secured and my mom kept. But, until college, I stayed within the physical and immaterial boundaries my parents established. I may have broken curfew once or twice. Erin was the trouble-maker. And college was close enough to bring laundry home.

But now, amidst my twenty-third summer, I was about as far from there as I could be while still being in the same country; 1,500 miles from 2268 Nichols Avenue. Crashing onto shore a few sandy steps from my blanket was the Pacific. Keri had grown up summering in the calm Sound waters, but I’d conquered those Jersey waves at a young age. So I got up and approached that Great Big Other Ocean, and as I neared the tide’s edge I allowed the water pass over my feet, thinking, maybe now.