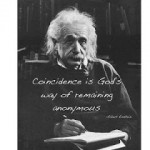 “There’s no such thing as coincidence.”

Whether you believe in this or not, it is likely that you have, at some point in your life, experienced a “seemingly planned sequence of accidentally occurring events” (that’s Webster’s definition). I have – with some being more faith-affirming than others – and have been musing about a few of the most recent ones to affect me in some way.

I woke Saturday not thinking about the dream that had just earlier impacted my sleep enough to prevent me from waking feeling refreshed. In the dream, I was confronted with a problem: my mother’s brother, my uncle, Richard, whom I don’t speak to much these days, needed a kidney transplant. (In real life, he is fine, as far as I know.) And I was being urged by some force in my dream to provide one of my kidneys, and I just wanted time to think about it. It was one of those dreams which unsettled me, but I think I moved on and, like I said, when I awoke, I was not even thinking about it.

So, there I was, early Saturday morning, sitting in a chair in my living room, drinking coffee and doing some reading and checking the headlines on my iPad before everyone woke up. I’m scrolling through the New York Times app and this op-ed headline hits me in the face: “Why People Don’t Donate Their Kidneys.” Instantly the details of and emotions triggered by the dream I’d had but had forgotten were called up and I sat there thunderstruck. What? How does that happen? Why does that happen?

During the summer, my family – my wife, daughter and son – were driving on a Saturday from our cottage in Old Saybrook to a country club in Massachusetts for a family wedding. It was a glorious July day. We were on I-395, in the quiet northeastern corner of Connecticut, and I was searching for a radio station providing a strong signal and decent music. I found one, and it was playing a series of songs from the 1980s, my childhood (as well as my wife’s). We were pumped. Men at Work. Madonna. Bryan Adams. Rick Springfield. Then, one of my all-time favorites, “Freeze-Frame,” by J. Geils Band.

So, the song ends and my wife and I are just talking about that song and I remember a story about how the lead singer of the band once roomed with David Lynch, the unique maker of surreal movies such as “Blue Velvet” and “Mulholland Drive,” and how Mr. Lynch thought the Lead Singer Guy was too crazy for him. If you’ve seen Lynch’s movies, you’d find that anecdote amusing. But the point is, I couldn’t remember the name of the J. Geils Band’s lead singer. I’m going through the alphabet. “George, something? No. Mark? No. Peter? Yes. It’s Peter, something. What is it?”

Now, we are off the interstate by now and traveling through Webster, Massachusetts, which has a lake with a really long Indian name and small concert venue called the Indian Ranch. The concert venue is on the road we are driving and has an electronic billboard to display upcoming acts. And just as I am saying aloud, “Peter, something. What is it?” the billboard changes in front of me to display not only an upcoming act to its venue but the answer to my question: “Peter Wolf.”

What?! Are you kidding me?

Anyway, here’s the video for “Freeze-Frame,” while you consider those “seemingly planned sequences of accidentally occurring events” (and, yes, this is what the 80s were like):