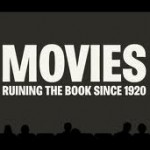 “I can’t believe they didn’t include the part when they go to court at the end.”

“It didn’t even start with Ponyboy getting jumped.”

“It cut out the whole ending!”

These were just some of the comments I heard at the conclusion of watching the film version of “The Outsiders” on Friday in class. Because, yes, how could “they” (or, in this case, “he”: Francis Ford Coppola, the director) leave out those crucial scenes. “Need a haircut, greaser?” Nope, not in the movie.

As of this writing, 80 percent of students who voted in the Edmodo poll said they preferred the novel over the film. I think it’s an easy choice: in this case, and in most others, the book is better than the movie.

There are a few exceptions. There have been some excellent movies – “Silence of the Lambs,” “The Wizard of Oz,” “The Godfather,” “Jaws,” “Lord of the Rings,” “The Shining,” “Harry Potter,” The Princess Bride” and, my favorite, “One Flew Over the Cuckoo’s Nest,” to name of few – which have been adapted from books. But, I’ve never read any of those books, so I can’t compare. Well, I’ve actually read and seen the first “Harry Potter” book and, again, the book is better.

Most people will say the movie “The Godfather” is as good if not better than the book, and that may be true, because the movie is a classic, but, again, I’ve never read Mario Puzo’s novel so I can’t say. The movie “To Kill a Mockingbird,” which we just finished in 8th grade, is a very well done movie, and won numerous Academy Awards, but it does not match the power of the novel, which is incredible.

Why is this? Why is it so hard for a movie to match the book? And, after so many fails (“The Hunger Games,” “Twilight,” “The Da Vinci Code,” to name a few recent ones), why do Hollywood and directors and screenwriters continue to plumb literature for inspiration for screenplays? I think both questions are relatively simple to answer.

The reason most movies are not as good as books is elegantly illustrated in this image: 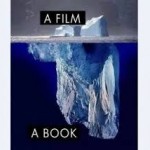 The movie only shows us what is on the surface, while the book can provide depth of the human experience. At the end of “The Outsiders,” the movie, Ponyboy begins writing a story in a journal. That’s what the movie-goer sees. But the reader of the book knows that this is an attempt by Ponyboy to save every other kid in America who can connect to the feeling of being left on the outside of a group or society from the fate of a few of his peers: Bob, Johnny and Dally.

The reason it continues to be done can be inferred from the list of the 50 top-grossing movies of all time. At least half of them are book adaptations. So, they make money. And, some of the movies on this list have also been good (i.e., they’ve won awards), so there’s still a belief by some in the industry that it can be done well.

It’s just a shame when a bad movie ruins a good book. But, as Robert Frost said, nothing gold can stay.