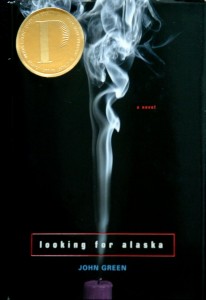 I recently finished reading John Green’s Looking for Alaska, a 221 paged realistic fiction book. I chose this book because people are always telling me I don’t read enough John Green, my mom, my friends, etc.  Before this book I’d only read The Fault in Our Stars, which I liked, but was much more interested in other books at the time.

Looking for Alaska is about a boy named Miles Halter, or better known to his few friends as Pudge. He has a strange obsession with famous last words, and can recite many by memory, for example Millard Fillmore said “That nourishment is palatable.” , after receiving a spoonful of soup, and then died. But more recently Miles is obsessed with looking for “The Great Perhaps” what it is, he doesn’t know yet, but he’s sure he’ll know when he gets there. In order to find this “Great Perhaps” Miles heads off to  Culver Creek Boarding School, where things get a little crazy. But, hey for the first time he has some real friends, his roommate “The Colonel”, Takumi, Lara, and Alaska Young. Together they become an unstoppable crew of pranksters, maybe the best the school has ever seen.

In the following scene Alaska reveals her namesake…

“one hundred days before

“NOT TO ASK the obvious question, but why Alaska?” I asked. I’d just gotten my precalc test back, and I was awash with admiration for Alaska, since her tutoring had paved my way to a B-plus. She and I sat alone in the TV lounge watching MTV on a drearily cloudy Saturday. Furnished with couches left behind by previous generations of Culver Creek students, the TV room had the musty air of dust and mildew- and, perhaps for that reason, was almost perennially unoccupied. Alaska took a sip of Mountain Dew and grabbed my hand in hers.

“Always comes up eventually. All right, so my mom was something of a hippie when I was a kid. You know oversized sweaters she knitted herself, smoked a lot of pot, et cetera. And my dad was a real Republican type, and so when I was born, my mom wanted to name me Harmony Springs Young, and my dad wanted to name me Mary Frances Young.” As she talked, she bobbed her head back and forth to the MTV music, even though the song was the kind of manufactured pop ballad she professed to hate.

“So instead of naming me Harmony or Mary, they agreed to let me decide. So when I was little, they called me Mary. I mean. They called me sweetie or whatever, but like on school forms and stuff, they wrote Mary Young. And then on my seventh birthday, my present was that I got to pick my name. Cool, huh? So I spent the whole day looking at my dad’s globe for a really cool name. And so my fist choice was Chad, like the country in Africa. But then my dad said that was a boy’s name, so I picked Alaska.”

I wish my parents had let me pick my name. But they went ahead and picked the only name firstborn male Halter have had for a century, “But why Alaska?” I asked her.

I liked the way the author used creative names for the characters and gave each of them a personality hat perfect reflected the others. I think that the author could have added more discretion of Culver Creek though, I felt like I had to decide what the school looked like, what the food tasted like, how the people looked, etc.  Overall, I’d give this book a 7/10 (which is not bad in my scale seeing that I’ve only ever given 1 book a 10/10). Would I read it again? Probably not, to me it’s one of those books you read once and enjoy it, and then forget about it. I think after reading this book my view on boarding schools has changed, I always pictured them as schools for very preppy rich kids, even though Culver Creek has it’s set of rich kids (The Weekday Warriors), the school is made up of mostly middle-class kids.