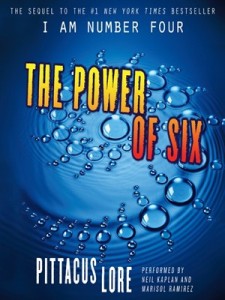 I recently finished reading the first half of “The Power of Six”, a 406 page novel by the author Pittacus Lore, a name though of by authors James Frey, Jobie Hughes, and other ghost writers of the “Lorien Legacies” series. “The Power of Six” was published in 2011. I found out about this book from my friends Jake and Ryan, who gave me advice on the order to read the books in this unique series. The titles of these books each have different numbers, which are the names of characters in the series. For example, “The Power of Six” is the second book of the series but the number six is in the title. This makes it confusing to find the next book in the series. This book reminds me of one of my favorite series, Michael Vey. In the Michael Vey books, all the characters are kids born with powers no one else in the world has. The premise of both books is the same. In both books, the characters have to fight people that have the ability to change the way the world is, and possibly end it.

In the novel, “The Power of Six,” John Smith, Six, Bernie Kosar, and Sam need to try to dodge police to stay away from the Mogadorians, an evil race trying to destroy people like John and Six. John and Six are from the planet Lorien, which the Mogadorians destroyed. They have come to Earth to hide from the Mogs but the Mogadorians followed. The Mogs will try at all costs to kill all 9 of the Lorics, even if it takes destroying Earth. Sam,  John, Six, and BK need to doge the police because they are considered terrorists because of the events in the previous book in the series. While these events are taking place, Seven is in Spain trying to find out and possibly contact John and the other Lorics. She is with her cêpan Adelina, who has left Lorien behind now that she is happy at the Santa Teresa convent that she and Seven, or Marina have been staying at for many years.

I was surprised when John, Sam, BK, and Six are able to escape the police and take down two helicopters while doing it. This shows how powerful they are as a team and how they may be able to beat the Mogs when ll of their Legacies are developed. I guess the author put this in to show a hint at what will happen when they face the Mogs in the books to come, almost a little bit of foreshadowing that the author probably included purposefully. Also, why didn’t Marina ever get found by the Mogadorians after all those years. All the other ones were tracked down but not Seven. I liked the way the author included “Words of the Wiser” moments between Adelina and Marina. For example, when Marina asks Adelina about finding John Smith, she tells her not to worry about the other Garde and to focus on the Church instead. Although, Marina did not think so at the time, this may have been good advise from Adelina because trying to find and contact John could have gotten them killed. “Give it up, Marina,” she says, and walks away. I have no choice but to follow, (52). In this passage, Adelina is telling Marina to give up on trying to find John Smith and the other Lorics and focus on Santa Teresa and school. This shows that Adelina has left Lorien behind and has no interest in fighting the Mogadorians or trying to find the other Garde any time soon.

This passage is one of the many reasons why I enjoyed this book. “The Power of Six” is a 8 out of 10. I look forward to reading the next book in the series.