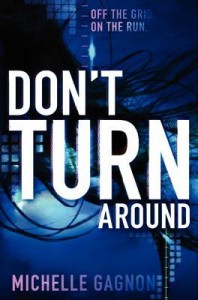 I recently finished reading Don’t Turn Around by Michelle Gagnon, a 313 page fictional novel. Don’t Turn Around, being the first book in the series it really has to impress me. It did. The book was published in 2012. I have never read a book by this author before so it was a new path for me to travel. When I read the back it caught my eye. Purely because of the action-packed sound to it. Just what I love in a book.

The book is about a sixteen year old named Noa who wakes up on a table in a “hospital” (we later find out it’s a huge warehouse) with an IV in her arm and her bracelet that she always wears is gone. She has zero memory of how she got there. She is told that she was in a car accident. However, Noa knows he is lying because she doesn’t own a car. Noa is a computer hacker who has been living off the grid, needs to discover who is hunting her and why. Then comes along a person named Peter Gregory. Peter is a rich kid and is the leader of the hacker alliance. When Peter realizes that he needs someone with Noa’s type of skills he sets out to capture her and turn her into a part of the alliance. Then a twist comes in, neither of them knows that Noa holds the key to a horrible secret, and there are those who would stop at nothing to stop her for all eternity.

I liked how the author would introduce a new character is a way that I have never seen before. She would slowly give more and more information about the character as time went on. In my opinion, a great way to do it. I liked how the author created suspense. She would just throw a whole bunch of information that would all tie together with something the character is doing and you would have to process a lot at once. However, all of the information thrown at you was kind of spooky or sinister if I had to describe it. It was an interesting take on suspense. I dislike how the author introduced the alliance. She left it really vague who they were and what they were actually trying to get/are going after. To this day I am still confused.

I found this passage interesting:

‘We all know that,’ Peter said impatiently.

Cody raised an eyebrow, and he fell silent. ‘So based on what I’ve seen so far, the folks at AMRF were researching PEMA.’

‘By experimenting on kids like me,’ Noa said bitterly.

‘They’re a little vague about that in the papers,’ Cody said. ‘They keep referring to test subjects by numbers, not names-that’s the weird thing; the way they filed their data is off.”

I found that passage interesting because this is the point in the book where they start to get a little skeptical of the alliance and all of the other organizations who are also on this race to get kids like her.

Overall, I would give this book a 7 out of 10. This is because it was action packed but really left me confused at the end.