I have just finished reading the 293 page novel, Fantasy league, written by Mike Lupica . This book is definitely a sports realistic fiction because there is not a NFL team in LA named the Bulldogs but is realistic. The author, Mike Lupica, has been called “the greatest sports writer for middle school readers”. Mike hosts his own show on ESPN Radio and is a sports columnist for the New York’s Daily News. He has written other books like Travel Team, Million dollar throw, and Heat. Mike now lives in Connecticut with his wife and his four children. The reason I read this book is because I was looking for a new book in the library and the subject really popped out at me and I decided to read it and I am glad that I did. 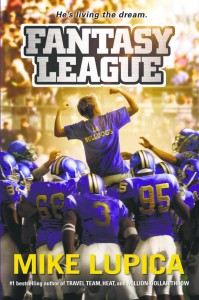 Charlie has a head for football statistics and can pick winning players for the various fantasy leagues he is in. His best friend, Anna, is the granddaughter of Joe Warren, the owner of the Los Angeles Bulldogs. The teams is in a losing slump, and has become the new(and old) joke on the Radio. Anna thinks that charlie should do his own podcast on the Bulldogs, and talk about new players that the Bulldogs need to acquire to win more games, and maybe make it to the playoffs. The playoffs seemed like a longshot but Charlie agreed with Anna to do the Podcast on the Bulldogs. Charlie finds a player that might interest Joe Warren and Matt Warren( the GM for the Bulldogs and Anna’s uncle). His suggestion is a new quarterback named Tom Pinkett. Every other team thinks that Tom is too old to still play in the NFL. Tom is brought to the team and is doing great. Charlie finds another prospect, Jack Sutton who played on another NFL team before but retired from football after a brutal accident on the field. Jack has done all of the Physical therapy and has recovered almost about why they are letting a 12 year old make draft picks for an NFL team? It all gets worse after the Bulldogs lose the three games after Jac is put on the team. Maybe Charlie making the decisions was a bad idea.

I liked how the author was really “into” the story in the the way of know how the game of football was played and there was a lot of good information about the NFL. Also, I liked how Mike explained charlie’s life and how packed it was with going to all the Games and looking for new player picks and prospects. I was surprised that Anna and her family were so into football, especially a girl knowing as much or even more than Charlie. This book reminded me of the book my Great-uncle wrote, From Colts to ravens. It made me realize how different of views diffrent people with different jobs can have. My great uncle was a sports writer for the Colts and the Ravens. He wrote his book about being with the players and being a commentator(almost) for every play. In the book it skips through the first 3 quarters quickly to reveal a win at the end of the 4th quarter or a loss.

I really liked this passage:

“They were waiting for the game to begin between the Bulldogs and the Bears in Chicago to start, Charlie and Anna Bretton at her house , Charlie’s mom having dropped him off, saying she’d pick him up after dinner with a friend over in venice.
“Women friend or man friend” Charlie said in the car.
“Women friend,” she said, “if it was a date I would have told you it was a date.”
“Dating is good,” Charlie said
His mom made a snorting sound. “You try it sometime”
he smiled at her and said, “I liked the last guy.”
“Not as much as he liked himself”” (Pg 12) I quoted this passage because it shows how much dialogue Mike Lupica uses in his writing.

If I had to rate this book I would give it a 8 out of 10 because it is a very good, descriptive, and fun book to read. I would recommend this book to anyone who likes sports and especially if they like football.
From, Jake F.