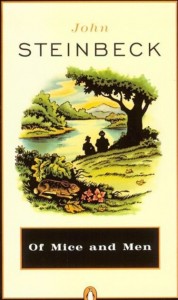 I have recently finished reading the 108 page classic, Of Mice and Men by John Steinbeck. John Steinbeck is a world renowned author that has written nearly 30 books and Of Mice and Men is said to be one of his finest books. The story takes place during The Great Depression when there was a lack of steady jobs and the characters fight through the pain to live a better life. The novel was published in 1937 and people are still reading one of Steinbecks best books and enjoying it. I really enjoyed reading the book because I have never read a book by John Steinbeck and I really liked his style of writing.

I chose to read this book because I had heard about John Steinbeck from classmates and I decided to give it a try. I also chose to read it because I saw it in the Classics section of the library and I pulled it out and read the inside cover and found that it had to do with the Great Depression which I was interested in learning more about.

In the book of Mice and Men there are two main characters, Lennie and George who are an unlikely pair but always figure out their differnces. George is a short and small man who at sometimes says that life would be eaiser without Lennie. On the other hand, Lennie is a big and tall man who has the mind of a child and acts like one too. Being laborers in the fields of California’s is not an easy way of life for the pair, but they perservere through the challenges in their way and always stay together. Although, George and Lennie have a life plan: to own land a shack that is all theirs. When they land jobs on a ranch their dream feels like it’s an inch away but they don’t know what’s coming next. Even with the aguements the pair sticks together and always forgives eachother and never turns there backs on one another.

I’d say that the theme of this book is to perservere in order to achieve your dreams. I think this because George and Lennie have to work for hours out in the burning California sun during a time of great hardship. I noticed how Steinbeck made George’s frustration towards Lennie more and more as the story went on and he bursts, but the two made up after a dream costly accident. The resolution to the main characters problem was when they had recieved jobs on a ranch to pay for their dream life. That is the resolution to the problem because without jobs, Lennie and George wouldn’t fulfill their life long dream.

In the novel I was struck by this passage where George says that life would be so much easier without Lennie.

“Lennie giggled happily. “I didn’t forget that, you bet.”

George lay back on the sand and crossed his hands under his head, and Lennie imitated him, raising his head to see whether he was doing it right. “God, you’re a lot of trouble,” said George. “I could get along so easy and so nice if I didn’t have you on my tail.”

I would rate this book a 9 out of 10 because it is one of the better books that I have read.