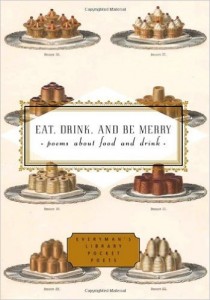 Recently I finished a book called Eat, Drink, and Be Merry. It was written by multiple authors and is a poetry book. It is a book filled with poems about food and drink. I have had it since I was little when I found it at a yard sale and thought it was cute because of how small it is (it is about the size of a hand, maybe smaller) and as a child i thought small things were more interesting than large things. I never actually read it though. As a child I would thumb through the section which were labeled with kind of food such as desert, fruit, vegetable, etc.

Recently I noticed it on my bookshelf and figured why not? So I picked it up and really enjoyed it! It has become one of my favorite poetry books. Most of the poems start with the name of a food or drink that the poems about. It is sometimes very funny to look at how certain authors describe foods that we deem so simple and basic but somehow they make it seem like one of the most beautiful things in the world.

I’d say the theme of this book is food, and is overall a very upbeat book.
I wish there were more books like this. I really enjoyed. The fact that it was all poems about food. They really made food seem more like art which I think is one of the best parts of poetry.

The narrative voice always felt to me as though it was a british woman on a cooking show. I can’t exactly explain why but I couldn’t escape that voice no matter how hard I tried to change it. Beware of the British cooking show woman in your head… Dun dun DUN.
I also can’t guarantee you will have the same experience. My friend who borrowed my book said it was a deep voiced scottish man.

This poem is a short poem but is my favorite.

Coffee arrives, that grave and wholesome Liquor,
That heals the stomach, makes the genius quicker,
Relieves the memory, revives the sad,
And cheers the Spirits, without making mad…

I love that poem not only because  I love coffee but I feel as though it perfectly describes the way coffee works. Makes the genius quicker. Basically a fancy way of describing caffeine and how it helps you to wake up. That is just a simple and short example of how poetry can turn something so simple into something that makes sense but you’re not sure how it just…well, does.