About a week ago I finished the book“Three Little Words,” a 336-paged memoir written by Ashley Rhodes-Courter, who is a public speaker, author, mother, and public speaker. She has two biological sons, one adopted son, and have foster 20 children. She has written two books that were about her life in the foster system. What makes this book so amazing is that it is a real story. This book gives you a glimpse into a real world that is so awful compare to mine and probably yours too. This book really makes you think about what others go through. I read this book because I needed to read a memoir and this one look really interesting. The foster care system stories have always interested me so I really wanted to read it. 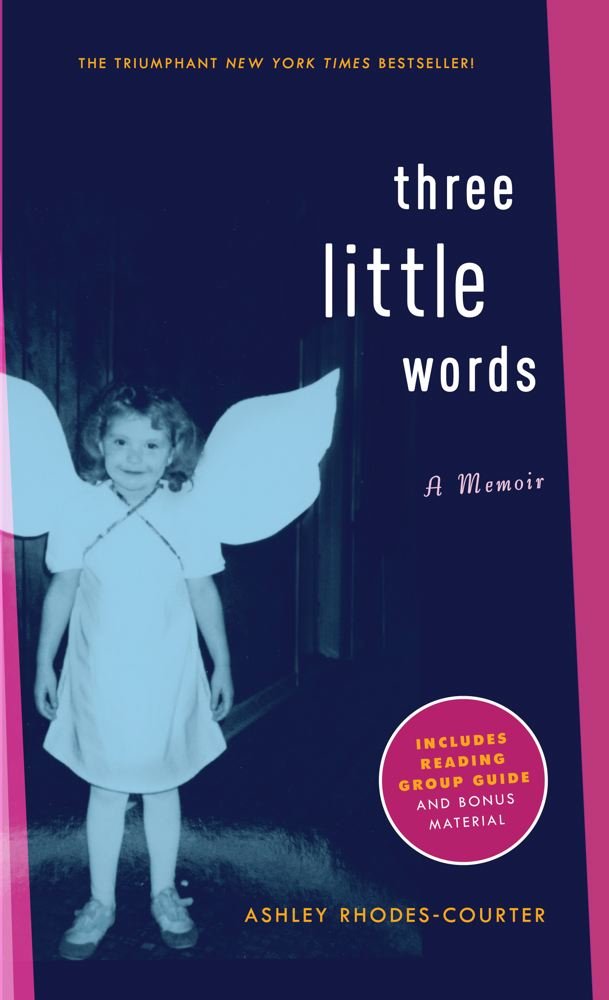 In the novel “Three Little Words,” Ashley is a confused, devastated girl, who really wants a family. From the minute she was ripped from her home, all she truely wanted was her mother back, to hold her close and sing to her. But Ashley’s mother needs to go through some tests to prove that she is fit to be a parent and that it might be awhile. So Ashley has to wait for her mother to pull herself together, mean while she is stuck in the awful foster care system which is not doing the best it can for her.

Years have past and Ashley has been faced with cruel foster parents and overcrowded homes. Everything seems to be failing her even her own mother, who has failed the tests she was given. Now she is looking for something else. A real family or at least someone who loves her. But the chances of finding someone who would take, it, is a slim and not many people get it. So now she has to find someone or some family to take her unless she wants to stay in foster care till she’s 18 years old.

I was surprised by how awful the foster system was to this little girl. First she was taken from her home with no explanation then separated from her brother and put in a very overcrowded home.  Then after being thrown around from house to house, from family to family. Her brother and her end up in a small trailer with over 10 other kids, this family is not nice. The women (her foster mother) only gives them a small breakfast and small dinner, leaving them hungry, then sends them outside for the rest of the day. Then there were the punishments. They had to run laps, eat hot sauce, not eat for a whole day, and sometimes they got beaten. It was very awful.

This book reminded me a lot of a show I really like, it’s called The Fosters. The Fosters is about a teen girl and her younger brother who finds a family after being through the foster care system for more than half her life. Seeing horrors and being with awful foster parents, which was just like what Ashley went through during her time in the foster care system. The show and the book are both about their struggles through it and how they got through it. I love both of them, even though one is true and the other is made up, they are both great stories.

I found this passage in the book and I really like it because of how the author shows and doesn’t tell. She uses description language to explain things about herself and her mother. Here is the passage…

“I was an intuitive two-year-old soaking up language and behaviors from a crew of rowdy adolescents who were trying on adult attitudes and habits. I got attention by acting grown up, and my mother bragged about how early I was toilet trained and how clearly I spoke.

My mother had a carefree attitude. She was too self-absorbed to fuss about my safety. Although she always strapped me in my car seat, her battered truck did not have seat belts. Driving down a bumpy South Carolina road, the unlocked door popped open. I tumbled out, rolling a few times before landing on the shoulder. My mother turned the truck around and found me waving at her. I was still buckled into the seat.”

This passage is the beginning of the book (page two) and it gives some information on her younger life and when she lived with her mother. She was fast learner and one who knew some bad language and used it, that is something my mother would never let me do. In the second paragraph it shows you how laid back her mother is with a story about a time where Ashley fell out of car. Her mother didn’t even seem to care. This gives some good information about how different her life was that most people in Easton. I like how the author shows and not tells, I should use that more in my writing and this good way to do it with a story on how someone was like it. I would rate this book a eight out of ten because it was a good book and I enjoyed it.