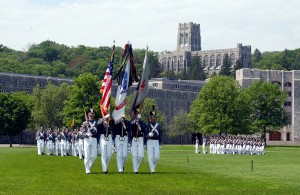 Everyone sat down in the rows of plush red and seats and began listening to a lecture about what our new cadets would endure during “Beast.” After listening for about 5 minutes, were told : “You have 60 seconds to say your goodbyes.”

We woke at 5:30 in the morning, and began brushing our teeth and getting dressed. My sister was getting ready slower than usual, and I could tell that she was having some hesitations. At 6:00 o’clock in the morning, we were out of the hotel and driving through base. We parked the car and began walking down the old stone steps. We then headed to the lowest entrance of the building.

As we waited in the long line, a cadet began ushering us in through the dlight door repeating the words  “Come on, hurry up.”

We were flooded with light as we walked into the enormous theater. A women walked us past other small groups that were getting the same speech that we were about to get.

Everyone sat down in the rows of plush red and seats and began listening to a lecture about what our new cadets would endure during “Beast.” After listening for about 5 minutes, were told : “You have 60 seconds to say your goodbyes.”

All at once, everyone shot up out of their seats and began saying saying their farewells to daughters, sons, and siblings. My sister hugged my parents and then came over to me. As we hugged, I whispered “Good luck” to her.

They then asked the new cadets to line up, and they headed past the long rows of seats out of different door.

They then ushered us out of the auditorium to make room to bring the next group in.

Sadness wrapped around me like a blanket… my sister was now officially a new cadet at the UNited States Military Academy, or West Point. But throughout the coming weeks of “Beast,” we would only be allowed one phone call.

I could hear someone crying, and I turned around to see who it was. To my surprise it was a young boy. My heart went out to him, as I felt the same way.

I knew that I had to just keep thinking that this was a great opportunity for Matilda. And besides, I’d get to see her on A-Day, where she would march 12 miles and officially be a cadet at the United States Military Academy.