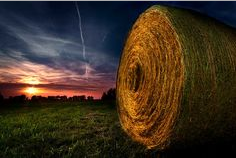 Every Sunday, bought time the golden sun pierced the navy blue blanket sky with holes of starry sky. Causing it to be purple. Then pink. Gold. Then a radiant sky blue. All the colors still captured in the small, scattered Cirrocumulus clouds even long after their gone.

Even if the forecast said thunderstorms the sun still made an appearance, and when it did rain we made it back in time with all the fresh, dried grass safely stacked in the dry, musty barn.

Every one of those hay days we hooked up my dad’s blue four door Toyota Tacoma pick-up the white a blue Kingston horse horse trailer and drive an hour to the beautiful fields of Washington, CT with my black and white dog, Abby. Sleeps 25 hours a day and runs for 2 minutes and will collapse of exhaustion. Whenever dad would get home from work, Abby would be the first to greet him, walking over slowly, the friendly part pitbull smile, wagging her tail and a grunt or two of joy and therefore since my dad would ask Abby if she is a good dog, I can up with a voice for her. An almost raspy, high pitched voice that responds right away. It was our thing.

We’d plug in our favorite CD, the best jazz collection and watch the fog lift from the valleys of the rolling mountains next to the I-84 eastbound side from exits 11-15.

We would pass the large open fields of the 2nd Governor’s Horse Guard and would watch the herds of horses gallop around in groups of 20. Well, they’re gone now. The beautiful chestnuts, bays, and blacks. Geldings and mares. They always brightened my day. Watching those wild ponies run.

The final stretch is the prettiest of the whole drive.

All the black, black and white, white and brown beef and dairy cows lying down from a lumbering night sleep, just opening their eyes in the short, blue, dewy grass with the rays of a golden sun overcoming them like fingers warming their damp backs with the restless gray donkey that is always looking at the torn up round bail as a monster with flailing arms…

Two minutes away and round bales lay scattered in the open fields.

We arrived to the large, hay stocked building and wait in line along with some 18 wheelers.

Dad turned over to Abby, “Are you good-doggie-Abby?”

Abby stuck her head in between the two front seats and crawled forward and attempted to lay down on the center counsel but fell to the right into my waiting lap. Laughing hard at her attempt to be an 80lbs lap dog, I managed to squeeze the Abby voice out. “Ya– I good-doggie daddy! I also a silly doggie!” meanwhile panting and smiling at us both.

“Okay if you say so.” said my dad while rubbing her face just the way she likes it and laughing at how accurate the voice is to her actions.

I jumped out onto the usually muddy drive and walked into the large barn with a hay bale city within itself, and I climbed up onto one of the large round bales and watched with the Blue Healer farm dog as the workers lifted and stacked bales onto others trucks in the chilly morning until our truck and trailer was stacked and it was time to go.

But on our way back south we stopped at The Ovens of France bakery. Picking up exactly 5 croissants for the 5 family members. Mainly a couple of warm “ham and cheeses” or a few mouth watering “chocolates” or a plain, melt-in-your-mouth sticky bun and a baguette for dinner. I’d eat my savory, chocolate croissant while Abby would stick her head through the headrest and stick her tongue out as far as possible to taste it, finally having me to give her a piece of the un-chocolatey part.

In conclusion, these were the Hay Days, the good and happy days where we had a father-daughter bonding experience every Sunday morning. In the bonding days we learned who each other was like, I rarely saw him during the week so I made up the missed time on these days and in the process of learning about what kind of person he was I became more like him in personality, strength, willpower and stubbornness towards life in general. By doing this I also learned many life lessons, for example how to stay strong through tough times and even if someone says you can’t do something because you’re smaller or that you’re a girl, push through it and try your hardest to prove them wrong or prove that you are an equal.