“Ahhhh!” I screamed as I faced the ground staring up at me from what looked like hundreds of feet. The bright yellow steel beams suspended a long, bench-like ride, and swung it from side to side, the sound of thunder and lightning boomed throughout the scariest ride I had ever seen. Why had I listened to my friends?

30 minutes earlier, as I walked through the old Connecticut amusement park, Lake Compounce, a yellow and blue ride caught my attention.

We were in the park for Jazz Band, a competition was going on throughout the day at a high school nearby and my friends and I were having fun all  day on the rides. The one that first caught my eye was Thunder N’ Lightning, a ride where people Lined Up to swing in Huge metal benches, at one point, directly facing the ground at about fifty feet in the air I wanted to back away from the ride already, I thought to myself.

“Come on, Grant. Don’t be scared,” Thomas told me convincingly.

As we got into the line, I could hear the screams coming from above me, yelping over the cracks and booms of the fake lightning and thunder.  I have to  go on the ride and overcome my fear, I thought as I stared into the eyes of the terrified people currently on the ride. I tried to convince myself that the ride was not as bad as it looked but I could not do it. I started to feel the fear boiling up inside of me as we got closer. Closer to the front of the line. Closer to the end of my life as I knew it.

As I crossed the line and walked through the gate, onto the platform of the ride, I tried to brush away the fear yet again. I stepped onto the long row of secure chairs, not looking so secure at the moment. I sat down next to Tiernan and my heart started pounding… 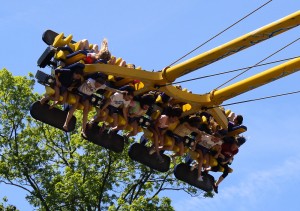 I felt my feet leave the ground, higher and higher, moving backwards inch by inch until I was fifty feet in the air. “This isn’t so bad,” I say to Tiernan, coming out as a scream due to the noise of the ride itself as we move back further and further, farther off of the ground. Then we dropped…

We dropped from 50 feet. To 40. Then 30 and then 20 and then 10, I felt adrenaline pump through my veins. “Wooohooo!” I screamed feeling the rush of air brush past my head. Soon, that Woohoo turned into a terrified scream. I yelled the loudest I’d ever yelled in my entire life (not exaggerating). I felt the bar move out of place as my body leaned directly parallel to the ground, dozens of feet below me.

We went back a few times, the fear never leaving me, each scream louder than the last, even as we slowed to a stop. I looked to the right of me to see how Rory, Tiernan, Thomas, and Colin were reacting to this terrifying ride. They were all laughing so hard and so much at how I acted on the ride. Tiernan said that he had never heard me, let alone anyone, scream that loud and I agreed. As the fear melted away, I started laughing along with them. “Wow,” I said. “ I’ve never screamed that loud in my entire life.

“Yeah,” they all agreed in unison, chuckling as they spoke.

That scream is still echoing through my body,  months later. The feeling of falling off the bench on Thunder N’ Lightning will never escape me. They say that near-death experiences change people. I guess thinking you are in a near-death experience changes you too. It changed me.

2 thoughts on “The Thunderous Scream”