Recently, I finished reading Love That  Dog, a 128 page poetry book by the author Sharon Creech, the Newbery Medal-winning author of Walk Two Moons and many other books. She has also written two picture books. Creech became the first person to win both the American Newbery Medal and the British Carnegie. In 2001, the same year Love that Dog was published, she won the Newbery for The Wanderer. 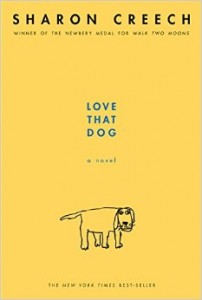 I found out about this book because for the Forty Book Challenge, we have to read two poetry books, While searching Mr. Jockers’ classroom library, I found Love That Dog, which caught my attention. After starting to read a few pages in class one day, I stopped and decided not to read the book because it felt too easy for me. The next day, still searching for a decent poetry book, I found the book again in the Media Center and decided to give it another try. I am happy that I did.

Love That Dog reminds me a little bit of the Shel Silverstein book, Where The Sidewalk Ends. In Where The Sidewalk Ends, there are many clever poems put together to create a witty story. The same is for Love That Dog. This book is set apart in so many ways from other novels. The way it is written makes it feel like you are in the main character’s head. This is just like Shel Silverstein’s books. They are completely unique and it almost doesn’t feel like you are reading a book while you read them.

In the novel, Love That Dog, a boy named Jack is learning about poems in his class. Each day, his teacher, Mrs. Stretchberry, reads his class a new type of poem. At First Jack does not want to listen to or write poems. He feels that girls write poems, not boys.

In the beginning of the story, he does not understand the poems that are being read to him. He thinks that a poem just has to have short lines. He tries to write a poem like one of the poems Mrs. Stretchberry wrote but he tells her to not read it aloud or put it on the board. Jake writes a poem based on every poem that Mrs. Stretchberry reads to him.

He becomes intrigued by a poem written by Walter Dean Myers. When Mrs. Stretchberry gives the assignment to write a poem about a pet, Jack does not know what to write about. Then, a thought comes to his mind.

Jack had a dog named Sky who died a few years before. Jack wanted to write the poem about Sky. After hearing all of the different poems, all different types, he did not know which type of poem he would chose. After trying a few, he finally went with the style of Walter Dean Myers’ poem, Love That Boy.

I was surprised when Jack allows Mrs. Stretchberry to put his poem up on the wall with his name on it. I guess, the author added this to show how much Jack had grown as a person over the past few months because this gave him the confidence to keep writing poetry and to write his Love That Dog Poem. I liked the way the author included Words of The Wiser when Mrs. Stretchberry convinced Jack to write the letter to “Mr. Walter Dean Myers,” as Jack calls him.

I was interested in the passage where Jack asks Mrs. Stretchberry if she can teach him how to type his own poems.

“Maybe you could show me how to use the computer and then I could type up my own words?” (66).

This shows how much Jack has grown and how he is not afraid to share his poems with whoever would like to hear them. What I love about this passage is how the author has Jack mature and become less shy. I also love how Jack wants to keep writing poems. The author wants to show that Jack has learned that he has a voice and wants to share it on his own, without the help of his teacher.

Love That Dog is an 8 out of 10. I look forward to finding more books like it in the future.