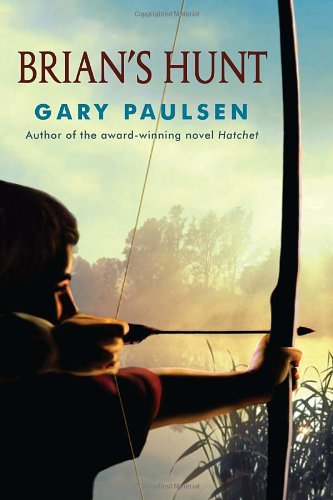 I finished reading a very short yet very fascinating story. It was Brian’s Hunt by Gary Paulsen. It is a descendant book from Gary Paulsen’s Hatchet. It is a realistic fiction book that is only 103 pages long.   I chose this novel because it’s about the wilderness and survival and I have always been fascinated with those categories. The book is about how Brian 2 years later after his fatal plane crash into the Canadian wilderness. He now thinks of it as home. He brought his canoe and bow. This time he added some dried food. He always liked making a fire by himself when he wanted to. He liked to think about when his life was in the wilderness all alone. Brian has set out to spend time in the wilderness. He plans to stay mostly by himself but has promised to work on some school work that he’ll be tested on when he returns later to the city. Brian is sixteen years old and could have simply dropped out of school at this point but has discovered an incredible thirst for learning.Brian recalls how un skilled he was at first as he tried to survive with no tools but a hatchet. He remembers the first time he’d managed to catch a fish and how he’d gradually become independent in the woods with no other people around. Then he’d been rescued and returned to the city and his parents. But Brian discovered he didn’t fit in. The noises upset him and he hated the constant activity. He’d convinced his parents and the school officials to let him have time in the wilderness alone. He wasn’t angry at anyone but had decided this is the life he now wants to lead. Brian is traveling by canoe at his own pace. His ultimate destination is the home of his Cree friends, David and Anna Smallhorn, who are camped on an island at the upper end of a lake shaped like an arrow. One evening David eats his supper on the banks of the lake and then pushes his canoe back into the water where the breeze will help keep the mosquitoes at bay. He’s suddenly aware of a noise and discovers it’s a dog. David is wondering where the dog came from, but soon discovers the dog is seriously injured. He considers possible causes of the wound but none of them make sense. David sews up the dog’s wound and she immediately attaches herself to him. He’s glad of the company and sets out for the next leg of his journey with the dog in the front of the canoe.After traveling only a short distance more, David stops and kills a deer, feeding the dog all she can eat in an effort to help her rebuild her strength. He continues to consider the possible causes of her wounds and is suddenly struck with an overwhelming fear for his Cree friends. He rushes the rest of the journey and arrives at their camp to discover the bodies of Anne and David, mauled and partly devoured by a bear. He then finds several other dogs, all killed by the bear. Brian is fearful for the three children of David and Anne and takes time to scout for tracks and signs of what happened. He discovers the oldest daughter, Susan, in a canoe on the opposite shore of the lake, and brings her back. She’s exhausted but unhurt and reveals that her younger siblings were visiting family in the city. Brian buries the bodies and Susan uses a radio to call for help. Officials arrive and take Susan to her relatives but Brian declines the offer of a ride back to civilization. He sets out to find the bear with the help of the dog. Will Brian find the bear? read more to find out. I was surprised with how the author gave us details about Brian after coming back from his journey like how he mention “He had a great thirst for learning” and how  he could of dropped out of school but didn’t. I also was surprised with how the author killed off a couple of the characters (Anne and David) . I not pleased about them being killed off. I wished he changed the story by only killing off the dogs and not Anne and David. So the 3 of them still could go after the bear. This following quoted passage is about Brian finding David dead and him figuring out that it was a bear that killed them. “David was dead in the corner. It couldn’t be but it was, he was there and torn terribly apart. It had to have been a bear. A bear, a rouge bear, had broken into the cabin suddenly and attacked and overpowered David and killed him… He had fought, or tried to fight. There was a rifle, a 30-30 in the corner by the body with the lever pulled open.” That quoted passage is on page 73. I chose that quoted passage because it’s where everything in the book get really stirred up. Brian at that moment doesn’t know what to think. He is horrified that David is died. He wasn’t expecting it.  I rate this book a 8 out of 10 because it was a short and fascinating novel.