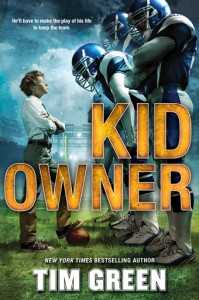 I found out about this book through the library at HKMS while looking for a Tim Green book I had not read yet. Tim Green, being one of my favorite authors, I am always looking for new books of his. This one, Kid Owner, caught my eye. The title was really what struck me. How could a kid be an owner? The question stayed in my mind as I looked at the title over and over again. I decided I had to read the book, and am glad that I did.

Kid Owner reminds me of the 1994 movie Little Big League, where a big fan (who happens to be a young boy)  suddenly becomes the owner of a major professional sports team. This is the same idea of Kid Owner where a boy is tasked with the unbelievable obstacle of owning his own sports team and needs to learn how to manage the team and still be able to keep his friends and do well in school, normal struggles of kids.

In the novel, Ryan Zinna has never met his dad so when he finds out he died, it is not as much of a shock as it would be of a normal child. He lives with his mom in a big house outside of Dallas, Texas. He was never the best football player but had a love for the game, even if he was being benched the whole time. So, when he finds out his father, Thomas Peebles, was the owner of the Dallas Cowboys and his dad had left the team with him, he could not believe it.

Ryan, being something of an outcast in school, best friends with two new kids Jackson and Izzy, first thinks of becoming popular and cannot picture the idea of him really owning his favorite team.

As he becomes used to this new idea, as fast as it came, it has the chance to vanish. Ryan’s half brother and the boy’s mother want to sue the team in order to try to become full owners of the team. Ryan needs to deal with this new stress boiling up, his football team where he has suddenly become a second team quarterback, and his friends that have suddenly been acting weird.

I was surprised when Griffin and Estevan sat at Ryan, Jackson, and Izzy’s lunch table. I was surprised because in the beginning of the book, Ryan and Griffin were not great friends. Although they weren’t enemies either it did not seem like they would ever become friends(274).

I was interested when Ryan starts to run the spread offense with his football team. It really shows how much he can control the team because he is the owner of the Cowboys. This showed how fame gives people power, which to me is a big message throughout this book.

“ I flipped through the pages, pointing to plays I’d drawn. Coach Hubbard’s brow rumpled again as he studied the plays. He hummed and nodded as if this was all old news to him….”(151)

In this passage, Ryan is showing the plays he drew up to Coach Hubbard for the first time and if he had not owned the Cowboys, Hubbard would not have listened to him. This goes back to one of the main themes of Kid Owner, that fame gives people power, sometimes more than they can handle.

The writer’s craft and themes of this novel by Tim Green, outweigh the unreal idea that a child can own their own sports team.