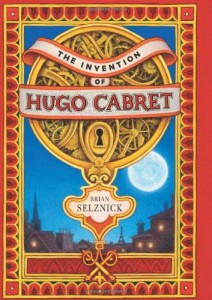 I recently finished reading Hugo Cabret. Although this book consists of more pictures then words it was surprisingly easy to follow the story. I think it was easy to follow the story because the pictures in this book have so much detail and look almost real. The author of this book is Brian Selznick. Brian is best known for picture books so it was odd to see him as the author of this book (Even though people refer to this book as a picture book). He is also the author of Wonderstruck which is the sequel to Hugo Cabret. After the book came out in 2007 a movie based on the book came out in 2011, Being rated a 94% on RottenTomatoes a leader in the movie rating business.

The book is based on the an orphaned boy all but an uncle named Hugo. When Hugo is caught by an old man trying to steal a part of a toy at the man’s toy shop to try and repair a mysterious machine, the man takes Hugo’s precious notebook. This notebook contains all the details on how to fix this machine of his. Hugo promises to work at the old man’s toy booth if he might give back his notebook. Hugo meets Isabelle the goddaughter of the old man. When Hugo Isabelle and one of Isabelle’s friends find out the true past of the old man they go to learn about it. The old man doesn’t allow this and wants to leave his past behind him. After the old man finally tells them the truth. Hugo goes back to get the old machine. On his way back he finds out news about his uncle and drops a bottle of milk that he was stealing. The people from which he was stealing from chase after him and Hugo falls on to the train tracks. When he is sure he’s dead a hand reaches down and grabs him.

For as big as this book is I thought that it would be a little bit more interesting. The pictures were spectacular but I’m even surprised that I made it through this book because I’m not a fan of big thick books but I do think that it was the illustrations that kept me engaged. I did like this book but it is not one of my favorites. I would recommend this book to anyone who likes to sit down and read for a long time because it’s a big one.
“I like to imagine that the world is one big machine. You know, machines never have any extra parts. They have the exact number and type of parts they need. So I figure if the entire world is a big machine, I have to be here for some reason. And that means you have to be here for some reason, too.”

When I first read this it really meant somethings to me because I have been thinking a lot lately about what I want to do when I grow up and when I read this it made me realize that no matter what I do I’ll know that I’m here for a reason and hopefully I’m doing something I love.

Like I said before I didn’t think this book was anything super special but the pictures really kept me into the book and I really hope that anyone who reads it enjoys it and likes the meaning of it as much as I did.