Recently, I finished the book Cinder (The Lunar Chronicles) by Marissa Meyer. It is a 387 paged novel which was published on January 3rd, 2012. I first heard of this book from a couple of my friends last year but never got around to reading it. I eventually had forgotten about the book until I came across it in the library. It didn’t seem like something I would want to read but I found out it was fantasy and science fiction so, I got addicted and ended up reading the whole series in 4 days, practically locked in my room. I don’t regret those hours I used up everyday though because it was such a great book and I highly HIGHLY recommend it to anyone who likes a little twist on classic stories. 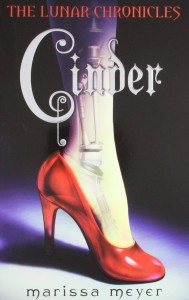 Cinder is about a girl named Linh Cinder who lives in New Beijing during a time where a deadly plague devastates the earth. At a young age she is believed to have been in a terrible accident causing her to be half human, half cyborg. She was taken in by a man named Linh Garan but, after his death her stepmother, Adri, is forced to look after her.

Cinder, being part cyborg, is treated very poorly from her stepmother and is made to work to make money for Adri. She eventually becomes the town’s mechanic.

Her being the mechanic eventually leads her into situations. One involving the emperor’s son, Prince Kai and another involving a war with Queen Levana of Luna, from the moon. Therefore, you should definitely read the book to find out what happens in the end. I assure you that it will be worth.

I loved how the author added the plague to the story. It heightens all of the painful moments in the story whether it’s from betrayal to inequality to love. Every time you read something new in Cinder it somehow attaches to disease. Which I enjoyed having in a story because it made it feel more real. They are many deaths from the plague which gives you a sense that you are really present in the whole tragedy (but in my case it’s also bad because I get way to attached to fictional characters and feel like the author is taking away part of my soul).

I’m sure from the summary you might be able to see that the story, in a way, is very much like Cinderella. The story starts with Cinder living with her stepmother and two stepsisters because her father had died. The story also has Cinder go to the ball without her stepmother knowing which, is very similar to Cinderella. Yet, I love how this “version” is very different. There is a lot more misfortune and problems in this story.

A quote from the book that I really like is “My only mistake was in waiting too long to be rid of you. Believe me Cinder, you are a sacrifice I will never regret” (287). This quote was said by the stepmother after she had told cinder she was giving her up for plague research. I don’t necessarily like how she is going against Cinder but it shows how far people will go to better themselves. Cinder went years with being pushed around by her stepmom because she is a cyborg. Yet, the only reason the stepmom wanted her was so she could make money. Not once before Cinders father left did the stepmom ask anything about Cinder. She failed to realize the importance of this one person’s existence and now that she could give up this “useless” cyborg for money, she was all for it.