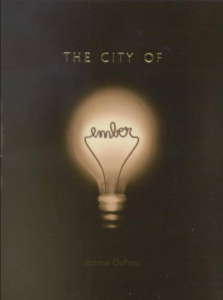 Not so recently I finished my book club book, The City of Ember, a 270 page Dystopian book by a Californian writer named Jeanne DuPrau. She is the bestselling author of this book, The People of Sparks, The Prophet of Yonwood, and The Diamond of Darkhold which are the next books in the quartet and this book was published in May 2003. I choose this book because I didn’t want to reread any of the Hunger Games books or Divergent, but this was my third choice so I went with it.

Lina Mayfleet, a 12 year-old brave girl who lives in Ember with her younger sister and her grandmother as Messenger and Doon Harrow, a 12 year-old curious boy who also lives in Ember with his father as Pipeworks laborer. Both are become best friends again after losing touch for years. But Ember’s orange glow from the lamp posts are running out, there have been blackouts every so often, one lasting over 8 minutes. Which is unusual for the lights never have gone out before. And frightening, when there is a blackout, there is nothing else that can make light, there isn’t even such thing as a movable light. Now both Lina and Doon want to find a way out of the city, as so mythically has been told. But the Major thinks what Lina and Doon are telling people is no good for the city so he posts Wanted posters around town informing the rest of the city ‘Wanted for spreading vicious rumors. Believe nothing they say’. So Lina and Doon run away from security guards, hide in abandoned classrooms and face the fear of the dark of a blackout to get to the supposed way out of Ember.

I was a little disappointed with this book, I was too easy for me to read and wished for a more of a challenging book. But I did understand why the author made it an easier read, there aren’t too many good dystopian books at a lower level who are 9-12 years old. I thought the author had a good picture in her head but I wish she would show it more than tell.

This book reminds me of Divergent because the City of Ember has a certain boundary line where it supposedly has no life or light. And to find a better life Lina and Doon have to cross that boundary away from the Major and his guards like Tris and Tobias and others had to cross the fence to find a better life away from the people trying to kill them.

Lina has really evolved throughout this book, from a quiet, but curious and daring girl sitting in the back row of the class to a strong, brave, loving girl. Same goes for Doon, he also sat in the back of the class, was curious, quiet and was interested in learning everything to the hero of the city, a courageous and independent boy.

I was very interested in this passage, it is memory moment to when Lina was younger and friends with Doon, she would do all the dares, even if they got wilder, she different than the rest, curious and daring. It shows how and when their friendship really ended. In this scene Lina dared herself to climb the light pole; and she did to a certain point and fell, everyone in her age group tried but never made it as high as Lina, then it was Doon’s turn…

‘“ I’m going to the top.” He clasped the pole and started upward, pushed again-he was higher than Lina had been-but suddenly his hands slid and he came plummeting down. He landed on his bottom with his legs poking up in the air. Lina laughed. She shouldn’t have; he might have been hurt. But he looked so funny she couldn’t help it.

He wasn’t hurt. He could have jumped up, grinned and walked away. But Doon didn’t take things lightly. When he heard the others laughing, his face darkened. His temper rose in him like hot water. “ Don’t you dare laugh at me,” he said to Lina “ I did better than you did! That was a stupid idea anyway, a stupid, stupid idea to climb that pole…” And as he was shouting, red in the face, their teacher, Mrs. Polster, came out onto the steps and saw him. She took him by the shirt collar to the school director’s office, where he got a scolding he didn’t think he deserved.

After that day, Lina and Doon barely looked at each other when they passed in the hallway. (pg 20)’

I thought it was good that the author included this in the story, it shows how they were friends one day and what made them not even look at each other the next. And why Doon and Lina embarked on the journey to the way out of Ember. If I were to rate this book, I would rate it a 7/10 because it was well written, descriptive and suspenseful, but it wasn’t the right level for me so I couldn’t enjoy it like I would in a more challenging book. Overall it was okay, but too easy.