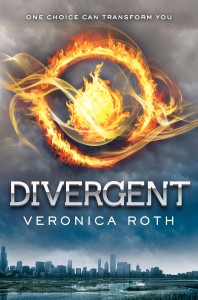 Recently, I finished reading Divergent, an 487-page realistic fiction book by a loving American writer, who came up with her series in college, and ever since she can’t stop writing really good books. Divergent published in 2011 and people can’t stop reading it, thousands of copies have been sold and it is loved by many people. I chose this amazing book because I have read almost all of the other books in it’s series and I really enjoyed all of them so I decided to read this one. Also I chose this book because it was recommended to me by one of my friends who also enjoys to read this book series. Finally I read this book because it is a very unique book because of it’s dystopian type.

Divergent is about a 16 year-old girl named Tris Prior who lives in a faction which is kinove like a city, she lives in Abnegation, there are 4 other factions named Erudite, Candor, Amity, and Dauntless. All of theses factions form one large place, not country because these factions are separated. Candor is the faction of honesty, Abnegation is the fraction of selflessness, Amity is the faction of peace, Erudite is the faction of clevernes, and dauntless is the faction of braveness. All of the kids go to school together and once they are 16 they chose a new faction to live in and stay in forever and do their jobs. The kids chose to stay in their own faction or leave their faction forever and get a job in a new faction. Tris lives with her mom dad and brother who is also 16 and his name is Caleb. Since Tris is 16 she has to chose if she is going to stay with her family or go to a new faction. So when the choosing ceremony came Tris’s parents thought Caleb and Tris were definitely going to chose to stay in Abnegation. Before the choosing ceremony the teenagers get tested to see which faction is right for them, nobody has to chose what they got in their test scores, it is just a guide. When Tris got tested she did not get recommended just one faction, she was recommended three factions, that is extremely rare, it is called being a divergent. The leader of all factions want’s all of the Divergents eliminated because she thinks they will destroy the society. Tris can’t tell anybody, she just has to hope nobody finds out about it. When the choosing ceremony comes Tris shocks her parents and choses Divergent, she was an abnegation how could she chose Divergent, the faction of bravery, how will she even survive initiation, since there is a new rule with initiation where you have to be on a leaderboard at the end of initiation to really be a member of the faction you chose. Tris has no experience and knowledge of bravery, how will she do it? Read the book to find out.

I was surprised when Tris chose a different when Tris chose Dauntless as her new faction because she never said anything about wanting to leave her faction and parents and become brave. Also it was very surprising because she was not just recommended Dauntless, she was recommended other factions, but she still chose a faction that she has absolutely no experience with.

This book reminded me of The Outsiders because both books showed so much bravery because Tris chose Dauntless, the brave faction. Tris also was the first person to jump off a building, she took her life for somebody who kidnapped her. In The Outsiders Johnny, Ponyboy, and Dally, risked their lives to save little kids who were trapped in a burning church, they didn’t even know these kids and back then there weren’t many people who would do that. They are very similar because of the braveness in both of the novels.

The quoted passage that I am about to include is when Tris has walked up to the podium at the choosing ceremony to choose what faction she will be going into. She takes a long time to choose her faction but eventually she chooses Dauntless. This is the passage

I hear my name and a shudder propels me forward. Halfway to the bowls, I am sure that I will choose Abnegation. I can see it now. I watch myself grow into a woman in the Abnegation robes, marrying Susan’s brother Robert, volunteering on the weekends, the peace of routine, the quiet nights spent in front of the fireplace, the certainty that I will be safe, and if not good enough better than I am now.

The ringing, I realize, is in my ears. I look at Caleb, who now stands behind the Erudite. He stares back at me and nods a little, like he knows what I’m thinking, and agrees. My footsteps falter. If Caleb wasn’t fit for Abnegation, how can I be? But what choice do I have, now that he left us and I’m the only one who remains? He left me with no other option.

I set my jaw. I will be the child that stays; I have to do this for my parents. I have to.

Marcus offers me my knife. I look into his eyes-they are dark blue, a strange color-and take it. He nods, and I turn toward the bowls. Dauntless fire and Abnegation stones are both on my left, one in front of my shoulder and one behind. I hold the knife in my right hand and touch the blade to my palm. Gritting my teeth, I drag the blade down. It stings, but I barely notice. I hold both hands to my chest, and my next breath shudders on the way out.

I open my eyes and thrust my arm out. My blood drips onto the carpet between the two bowls. Then with a gasp I can’t contain, I shift my hand forward, and my blood sizzles on the coals.

I am selfish I am brave.

I like how the author really made the writing in this passage very dramatic, and very suspenseful. I also like how the author put lot’s of Tris thinking about the future in this passage. Finally the passage was my favorite part of the book because of it’s details. I’d rate this really good book an 9/10. I liked it, but there was a some parts that were not good, but I overall really like it so I gave it a great grade.