I finished the book Dorothy Must Die by Danielle Paige. It has 452 pages in it. I read it because I found online recommends and someone working for the Easton Public Library recommended it. Danielle Paige has written a couple of other books, mostly centering around Dorothy Must Die like Heart of Tin. Heart of Tin is about how the Wizard gave him a heart and after Dorothy comes back to visit her old friends his heart goes toward Dorothy and he does whatever would make her happy to try to make her heart his. Most of her books center around main characters from the original book and Dorothy Must Die like The Witch Must Burn centering around Dorothy and Glinda. The book Dorothy Must Die is one of three books in the series that I may read. The Author also works in the tv industry. She is a graduated from Columbia University She lives in New York City.

The Book is about how Dorothy came to Oz again and was given power and magic. And the power went to her head. Now she demands all magic possible while ruining Oz in the process. And the main character is Amy Gumm from Kansas and she get stuck into Oz by a tornado and sees Oz looks nothing like the book or movie just a crumbling yellow brick road. Evenally the Revolutionary Order of the Wicked take Amy to train and fight for a mission. The Revolutionary Order of the Wicked are three witches and a trainer.

A passage I liked was “She told me that whatever anyone at school said, a trailer was where I lived, not who I was. She told me that is was the best home in world because it could go anywhere. Even as I little kid, I was smart enough to point out that our house was on blocks, not wheels. Its mobility was severely oversold. Mom didn’t have much of a comeback for that. It took her until around Christmas of year when we were watching The Wizard of Oz on the big flat-screen television- to come up with a better answer for me. ‘See?’ she said, pointing at the screen. ‘You don’t need wheels on your house to get somewhere better. All you need is something to give you that extra push.’ I don’t think she believed it even then, but at least in those days she still cared enough to lie. And even though I never believed in a place like Oz, I did believe in her. That was a long time ago. A lot had changed since then My mom was hardly the same person at all anymore. Then again, neither was I. I didn’t bother trying to make Madison like me anymore, and I wasn’t going to cry over cake. I wasn’t going to cry, period. These days, my mom was too lost in her own little world to bother cheering me up. I was on my own, and crying wasn’t worth the effort. This passage is about her mom and her changing. Madison is a person who bullies Amy in school like how she ruined her 9th birthday. I like the passage because it highlights what kind of life Amy has and how she deals with it, not the best, but still tough in a way.
I would rate this book 6 out of 10 because the book was attention grabbing but toward the end it started to get slow paced. And like every other young adult there had to be some romance in the book. But the romance was so random and didn’t go anywhere it was just stuck in the middle of the book I recommend this book if you like fantasy. 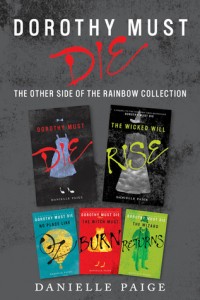