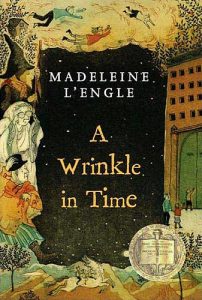 Recently, I finished the book A Wrinkle in Time, a classic novel written by Madeleine L’Engle. She was born on November 29th, 1918 and lived in New York City until the age of 12. After she was married and had a baby girl, they all moved to Connecticut in a small dairy farm village. A Wrinkle in Time has 203 pages and is a mixture of science fiction and fantasy and also considered a classic. I decided to read this book because it was in my ELT teacher’s room, Ms. Solís, and I had forgotten my own book.

This novel is about a girl named Meg Murry, the eldest child. She lives with her mother, Mrs. Murry, and her three brothers, George Wallace, the youngest, and Sandy and Dennys, who are twins. Her dad mysteriously disappeared and Meg wants him back. But, no one knows where he is. They meet a mysterious figure who calls herself Mrs. Whatsit and she mentions the word tesseract. Mrs. Murry almost faints. The day after, Meg finds out that tesseract is a theory that Mr. Murry was working on before his disappearance. On the same day, George Wallace and Meg run into one of Megs’ classmates, Calvin O’Keefe. Though popular and well-liked in school he considers himself a mis-fit like George Wallace and Meg. All of them go to a haunted house, which George Wallace already knows is where Mrs Whatsit lives. When there, they meet a friend of Mrs Whatsit, Mrs Who. They find out that Mr. Murry is in trouble, so all five of them go on a trip to save him. They all want him safe and at home. But, Mrs Who and Mrs Whatsit can’t assist them, so they have to leave once they transport Meg, George Wallace and Calvin to the planet Camazotz. It is an unusual planet where everyone does everything at the same time. There is a thing called “It”, that is controlling everything. They find out that Mr. Murry is being kept prisoner by “It”. Will they save him in time?

I liked the way the author made each chapter name a character they meet or an object they learn about. For example, The Man with Red Eyes, Aunt Beast, The Black Thing and Mrs Whatsit. I liked this because it made you wonder what that is or how it links into the story.

I noticed the way the author made Meg a very strong and determined girl. Meg isn’t afraid to stand up for herself or what she thinks. While fighting “It”, she held out longer than the others because of her willpower and courage.

This book reminded me of The Lightning Thief because in both books the main character and their friends go on a mission to save someone, and they discover something in themselves they never knew was inside of them. They also are key to the success of the mission but can’t have done it alone.

Finally, I was interested in this passage when Mrs Whatsit is about to leave the three of them on Camazotz. L’Engle writes…

“ “You will need help,” she told them, “but all I am allowed to give you is a little talisman. Calvin, your great gift is your ability to communicate, to communicate with all kinds of people. So, for you, I will strengthen this gift. Meg, I give you your faults,”

“But I’m always trying to get rid of my faults!”

“Yes,” Mrs Whatsit said. “However, I think you’ll find they’ll come in very handy on Camazotz. Charles Wallace, to you I give only the resilience of your childhood.” ”(p.112)

What I like about this passage is it gives hints on what is going to happen next and it builds suspense. I found myself coming up for predictions of how these gifts will help them on their quest. I’m glad I read it. A Wrinkle in Time is a 9 out of 10.