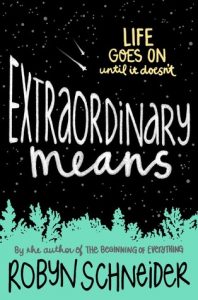 I’m a little over halfway through a book written by Robyn Schneider, Extraordinary Means. Robyn Schneider is not only an author, but an actor and online personality. She studied creative writing and is a graduate of Columbia University. She is also a graduate of the University of Pennsylvania School of Medicine, where she studied medical ethics. Schneider developed her own youtube channel while she live in California.

I heard to read this novel through my recommended on goodreads, and decided it might be fun to read since it was in the “more like this section” for one of my favorite books.

Extraordinary Means alternates between two 17 years olds perspective, Lane and Sadie, at Latham House, a sanatorium for teens suffering from tuberculosis. It began in Lane’s perspective, being admitted into Latham House. At his first meal, he sees Sadie from across the cafeteria. He then realizes that he knows Sadie from going to camp with her, but little does Lane know that Sadie is holding something against him. Lane wants to go back to school at home to graduate as top student, but his doctor tells him there is no way that is happening. So, Lane decides to adapt to his new life and bend the rules. Throughout the the book, Sadie teaches Lane how to finally “live.” Lane has always been the star student, starting college courses at 17 and followed the rules. Sadie helps him realize that at Latham House, there are no punishments and the worst that could happen is having the privilege of movie night taken away.

The genre of this book is complicated. Even looking at the genre on goodreads was unclear. Some people said fiction while others said realistic fiction. Tuberculosis isn’t as common now, but at the same time, this could still be a true story, making it hard to say which genre Extraordinary Means is.

I wish that Schneider had waited until further in the novel for Sadie and Lane to start having feelings towards each other. They started liking each other so early in the book, it was almost overwhelming. Adding onto that, it took almost the whole novel for someone to make the first move, this just made my anxiety so much worse.

One of my favorite passages in Extraordinary Means takes place in the cafeteria after Marina, one of Lane and Sadie’s friends brings up how they knew each other before Latham House. The passage takes place from Sadie’s perspective.

“‘Lane, you knew Sadie from before, right?’

I tried to shoot Marina telepathic signals to shut up, but it didn’t work, probably because I don’t have superpowers.

‘So, what’s the story with you two?’ she asked. ‘Sadie won’t tell us anything.’

If I could have kicked her under the table, I would have.

‘There’s nothing to tell,’ Lane said, and I breathed a sigh of relief. ‘We were thirteen and went to the same summer camp. I pretty much thought girls had cooties back then.’

‘I do have cooties,’ I said, and Marina almost choked on her juice.

‘Can we please call it that from now on?’ asked Nick.

‘Sure,’ I said. ‘I can just picture the final Facebook statuses. ‘She fought a heroic but ultimately unsuccessful battle against a grave case of cooties.’’

‘Our little angel has gone to a better place, a place free from cooties?’ Nick suggested.

‘Oh my God, stop.’ I was cracking up. We all were. But it wasn’t funny. Not really. Being at Latham had warped all of our sense of humor, until there we were, calmly eating our burgers while composing fictitious final Facebook statuses for hypothetically deceased teens.”

I liked a few different things about Schneiders writing in this passage. For starters, I liked how she made the characters find humor in their situations, almost like it would make it a little better. The other thing I liked about her writing in this passage was the way she adjusted the length of her sentences. I say this because  Once Sadie got the realization that they were making jokes about what her Facebook status would be when she died, Schneider shortened the sentences. This made the reader slow down and have the same realization as Sadie.

I would definitely rate this book a 10/10 for so many different reasons and it is by far one of the best books I have ever read.