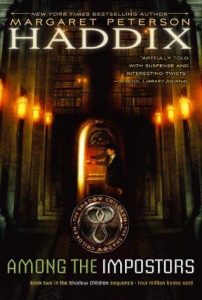 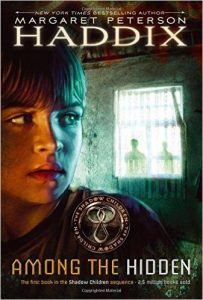 A futuristic US totalitarian government wants to end the hunger epidemic caused by overpopulation and poorly distributed food. They do this by passing a population law that states all families must have no more than two children. All third or fourth children are illegal and must be eliminated. The government also has every family give up their pets and prevents families to privately grow food. Barons are the rich people in the society. They can get by all the laws of the society easier. So, they can have third children and just get fake IDs, and they even can have foods that are outlawed such as potato chips. But, many third children are born anyways because their parents want them. They all have to hide from the government or else they will get caught and killed. These third children have to live very terrible lives and sit in an attic or basement without ever going outside. So, Luke, a twelve year old kid who lives on a farm with his parents and two brothers, decides to run away from his house and meet Jen, another third child, and makes up a rally to end the population law. Jen is the leader of the rally, and it fails, and she dies. Luke gets a fake ID from her father, and heads off to school to help out other third children. He gets tortured at the school but he ultimately punishes the kid who tried to capture other third children by having Jen’s father take him away. He helps the third children by making a garden for them to grow food. Here is an interesting fan made trailer of the first book.

We were surprised how the author killed off Jen in the first book. We were expecting for her to be a main character and be with Luke throughout the entire series. When Jen died in the first book, the story became very different and took a turn in the storyline. Jen was a leader and a mentor to Luke and taught him a lot about his values throughout the rest of the series. For example, on page 79, Luke is at Jen’s house and she offers him potato chips. Luke thinks that he doesn’t deserve the potato chips because they are illegal, because only barons can eat “junk food” like soda, chips, etc. This is when Jen says “Yeah, well we’re illegal too, so why shouldn’t we enjoy ourselves? Jen asked thrusting a bowl of chips at him.” Jen changes Luke’s perspective on the government and the population police. Before Jen, Luke thought that he really didn’t deserve to live and was just eating other people’s food by staying alive. Jen convinced him that he has a right to live, the government is just not distributing the food good enough.

The main character, Luke, changed a lot throughout the books that we read. He developed gutsy and adventurous character traits. We realized this from reading the two books in the Shadow Children series and taking notice of some of the actions Luke did. For example, in the first book Among the Hidden, Luke is completely banned from going outside or even just leaving the house, as it is too risky and dangerous due to the fact that someone might see him. One day while looking through a window in his attic of a bedroom, Luke realizes that after watching enough, there was another 3rd child a couple houses over. Being that Luke is desperate to meet a person other than his brothers, his mom and, his dad, Luke takes the huge risk of going a couple houses over, and breaking inside. It is a huge risk even just for Luke to step into the kitchen without the blinds drawn, let alone him breaking into the neighbor’s house to see if another shadow child was living inside. Sure enough, it was another third child, by the name of Jen. At first, Jen did not know what to think of Luke, tackling him to the ground the first moment she lay eyes on him. But the moment the two words “Shadow Child” left Luke’s mouth, Jen let him go. Luke has also changed throughout the book because Jen taught him so much in their time together. Before Jen, Luke did not know much about the government issue with the population police. When Luke visited Jen, she would always blab on about it, saying they are wrong, and giving him books about the two child policy and the population police. Luke took these books home, and read them.

This is an interesting passage our group enjoyed reading. This quote takes place when Jen climbs in through Luke’s window in the middle of the night. She comes to try and convince Luke to lead the rally. These are the last words she says to Luke before she goes of to the rally.

“‘I’m sorry,’ she continued. ‘I didn’t come here to harp at you. This is dangerous, and no one should go unwillingly. I was too hard on you the other day. I just wanted to say- you’ve been a good friend. I’ll miss you.’

‘But you’ll be back,’ Luke said. ‘Tomorrow- or the next day-after the rally. I’ll be over to visit. If you’re rally works, I’ll be walking in the front door.’

‘We can hope,’ Jen said softly. Her voice faded away.

We as a group really liked this passage. We liked this passage because it is showing the two big characters in the story, coming together after a feud they had, whiles having serious talk about the rally that Jen was hosting. This was also the very last conversation Luke and Jen had together which makes it very emotional. Luke remembers this moment throughout the series. From that moment on, to many shadow children, Jen was viewed as a hero.

Overall, we really liked these books. They had a good storyline and some suspenseful moments. We rate Among the Hidden 9/10 and 8.5/10  for Among the Imposters.