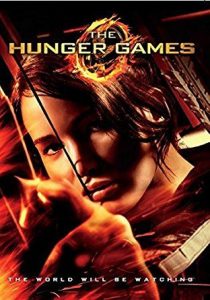 Recently we have just finished the Dystopian thriller, The Hunger Games by Suzanne Collins. The 374 page novel was written in 2008 and is the first book in the three book series including Catching Fire that was made in 2009 and MockingJay, the third book in the series was written in 2010 . Suzanne Collins has also written a book series, The Underland Chronicles consisting of 5 books. Suzanne Collins was originally born in Hartford CT and now has 2 kids of her own. We wanted to read the book, Hunger Games because one of us had read the series before and wanted to refresh his memory, two of us had not read the series before so they wanted to read it.

In the Hunger Games it takes place in a futuristic version of North America that they now call Panem and in Panem the Capitol is the government. The Capital tries to put on a good show for the hunger games each year and in the 74th annual Hunger Games the Capital put on a twist. The capital changes the rules so there could be two winners and once there were the two winners (Peeta and Katniss) they would change the rules back to only having one winner. Peeta and Katniss decided to show that the government can not control them by eating berries they found that another tribute died from eating. The Capital could obviously not end a hunger games with no winners so right before the tributes were going to kill themselves they make a quick rule change again so there could again be 2 winners.

In this book, Katniss is the most important character in our minds, and the book revolves around Katniss from her point of view. So Katniss Everdeen and Prim Everdeen are put into a raffle with everyone else in her district between the ages of 12 and 18 for who would be picked for the Hunger Games. Katniss put in 8 tickets for herself because she already had to put in 4 for her age, and 4 more for extra food for her family. Prim only had to put in 1 because it is her first year of eligibility. Katniss is relieved because Prim has the smallest chance to be picked. But Prim gets picked to be in the Games and Katniss is extremely scared for her. Katniss does not want Prim to be in the Hunger Games because Prim would be an easy target because she is her older sister and would feel responsible for Prim’s death. Katniss volunteers to be in the Hunger Games instead of Prim to save her from almost certain death. So Katniss put forward a big sacrifice for Prim and eventually tied the Hunger Games with Peeta. Early in the book this was definitely a changing point and was unexpected.

Another major character in the book is Peeta Mellark. He is the son of two bakers and the younger brother of two boys that all live in District 12. He wants to grow up just like his parents were and become a baker alongside them. In addition, Peeta wants to be a kind and generous person to others and not get criticism from his parents about it. For example, there was one time when a girl his age was walking by his bakery and was starving. He recognized her from school and her name was Katniss Everdeen. He felt empathetic for her and decided to go inside the bakery and get a piece of bread to give to her. It was against the rules of the bakery to give food to someone who didn’t pay for it. Peeta decided that it was worth breaking the rules for someone to be able to eat if they’re starving. He succeeds but afterwards gets assaulted by his parents for breaking the rules. All Peeta wanted to be was a baker and a nice person. But then he gets chosen for the Hunger Games. The other tribute that was chosen for the games was Katniss Everdeen. When both are finally announced, they look at each other, remembering the sequence of events that happened that one night at the bakery. Peeta was shocked and scared to be chosen and he just wanted everything to stay normal. He was still chosen as one of the tributes and there was no way out of it. So, he has to face reality and go through the Hunger Games even if it meant putting himself in a life or death situation. He somehow gets through the games until only two tributes left and it is just him and Katniss as the last two standing. He decides with Katniss to rebel against the Capitol and either kill themselves at the same time and have no winner, or let there be two winners. Right before they are about to kill themselves a person’s voice comes over the loudspeaker in the arena and commands them to stop. They let there be two winners. Now Peeta is faced with the tough task of being a rebel against the Capitol.

The climax in a book is determined by there being enough action as well as enough emotion to fit with the overall plot of the book. We think that the climax of the book is when Rue dies and there is a rebellion in District 11. Katniss pays tribute to Rue after her death and covers Rue in flowers. After seeing this, the people in District 11 decide to rebel against the Capital and burn buildings while causing great conflict between the rest of the districts. They do this because they know that the Hunger Games are wrong and the government has been making terrible decisions. This is when the climax happens and the rebellion really begins. This one rebellion was the one that really started the strings of rebellions throughout the districts.

Katniss, as a character has changed so much from the beginning of the story until the end. The character development of Katniss started off with a girl trying to provide for her family in a cruel futuristic version of North America now called Panem. Katniss originally was anti-social and doubtful of herself and her skills, but as the book goes on Katniss learned good manners and acting nice because she had to talk in an interview on live TV. She also had to learn to make friends (if you can call it that) with Peeta. When Katniss was living in District 12 she thought that it can not get any worse than she has it but she starts to learn after talking to Rue, a girl in District 11 that where she lives it could get even worse. In district 11 a boy was killed on the spot when he tried to sneak a pair of night-vision glasses into his pocket. After hearing about that she learned how she is not living as bad as she thought she originally did.

In The book, The Hunger Games there is a passage that really stood out to all of us that was fascinating and surprising to read because it gave us a great understanding of what was going on. This passage takes place when Katniss is wounded from wasp stings and finds a small girl named Rue who might know how to heal it, here it is:

“I plunk down by the fire and roll up my pant leg to reveal the sting on my knee. To my surprise, Rue places the handful of leaves into her mouth and begins to chew on them. My mother would use other methods, but it’s not like we have a lot of options. After a minute or so, Rue presses a gloppy green wad of chewed leaves and spits on my knee. “Ohhh.” The sound comes out of my mouth before I could stop it. It’s as if the leaves are actually  leaching the pain right out of the sting.”(The Hunger Games by Suzanne Collins Page 200-201). This short passage gives us such a precise explanation of how Katniss felt like. This passage also explains that Rue is actually trying to help Katniss and Katniss trust Rue enough to do this semi-gross procedure.

This is one of the most exciting, action packed book all of us have ever read with so much description and Character development it makes you want to read it forever. This book always ended on a cliffhanger at the end of each chapter and throughout the book there were new surprises you could not even expect, that is why we rate this book 10/10.