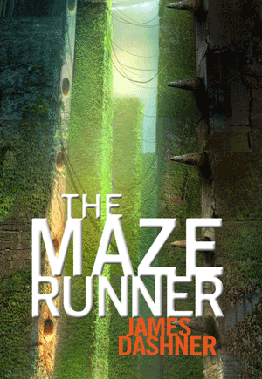 Dear Readers of the Blog,

We have recently finished reading The Maze Runner a 375 page, dystopian series written by James Dashner. James was born in 1972 in Austell and moved to Duluth when he was two years old. He graduated from Duluth High School in 1991. He attended college in Brigham Young University in Utah where he met his wife and where he now lives. He initially worked in the field of finance before becoming a full-time writer. James has written various phenomenal books but he is very well known for writing The Maze Runner series. There are 4 books in the series, including The Maze Runner, The Scorch Trials, The Death Cure and The Kill Order. These books are available  is in print, ebook and audiobook.  We chose to read this book because we thought it would be really interesting and we both had seen the movie before but we wanted to read the book and look at the differences between the two versions.

In the Maze Runner, Thomas, a 17 year old has been placed in an area called the glade, he has no memory of who he is or how he got there. He discovers that the Glade is run by two boys, Alby, the leader, and Newt, the second-in-charge, who both are trying to find a way out and they lead everyone. Every month a new boy comes up from the box with no memory.  The Glade is surrounded by four walls made of concrete. There is only one way to get out, and that is to go through The Maze. But, this isn’t easy because the walls in the Maze change every night. In The Maze, there are strange creatures known as Grievers, one sting from them can cause you to die or with the Grief Serum, you will go through the Changing. The group calls themselves The Gladers. They are trying to stay alive and solve the Maze by mapping everything and looking for anything that could help them. But, when the newest member of the gladers, Teresa, shows up, everything is different and clues start showing up everywhere, and the box stops coming up, forcing them to find the exit. Will they make it out of The Maze?

In the novel, The Maze Runner, we thought that the point of the view of the book changed it drastically. The whole story is told in Thomas, the main character’s point of view. Since it was told in Thomas’ point of view, the reader is given insight on all of Thomas’ feelings, emotions and fears. In the beginning of the novel, Thomas is scared and confused because he was trapped somewhere where the only way out was by facing the deathly Grievers in the Maze. We both felt a lot of sympathy for Thomas throughout the book and it made us feel like we were in Thomas shoes because we always knew exactly what we was feeling. This also tells the reader about what Thomas thinks about other character’s. For example, it was obvious to the reader that Thomas did not like Gally, and we also knew that he did like Chuck, Newt, Alby, and Teresa when he met them. We really liked this about the story because it made the plot more interesting and it made the reader’s (us) feel like we knew a secret that all the other characters didn’t know about Thomas’ feelings and true thoughts.

We thought that the main theme of the novel was bravery. Thomas was very brave even when he knew he had a high chance of dying. Thomas displayed bravery in the book many times. One example is, when Thomas ran into the Maze to help Alby and Minho when the walls were about to close he was being brave, but also when Alby got stung by a Griever, and Minho was just going to leave Alby there, Thomas couldn’t leave anyone behind so  he helped Alby from the Grievers. This showed bravery and selflessness because Thomas didn’t even know these people, yet he sacrificed his life to save two strangers. We thought that this bravery that Thomas showed made it more interesting to read about Thomas and what he was going to do next.

We were surprised when Thomas was able to convince Minho to go into the Maze with him to explore and we were surprised that he also convinced Newt, who thought it was pointless and that they were not going to find anything new. The boys said in the book that they didn’t like change and they had been doing the same daily routine for two years and they had been searching in the maze for two years. In the text, Newt says, “ Two years, I’ve been here. Aint none been here longer. Two years we have tried to solve this thing, no luck. Shukin’ walls move out there at night just as much as these doors. You ain’t goin out there, Shank, you aint gonna find nothin” (pg. 45). When Newt says this to Thomas it tells us that they don’t think Thomas would find anything different. But, after this later on in the book, they actually agree to let Thomas go into the Maze and train to become a runner, and Thomas proves them wrong. We both agreed that this was a very surprising part and it was a part in the book that changed the whole story because now Thomas was going to be a runner, looking for a way out, and possibly solving the maze.

In the beginning of the middle of the book, Minho and Alby, two runners, are in the Maze when the walls are about to close and Thomas and all the other Gladers are watching them trying to make it out of the maze before the walls close. We were struck by this passage: “Thomas knew he had no choice. He moved. Forward. He squeezed past the connecting rods at the last second and stepped into the Maze. The walls slammed shut behind him, the echo of its boom bouncing off the ivy-covered stone like mad laughter (page 112).”  We liked this passage because it shows Thomas’ bravery even though he didn’t even know these people, like we said before. We also thought that this quote showed how the author writes, because this passage was the last part of Chapter 16, and it showed how the author always left every chapter on a cliffhanger and that created a lot of suspense for the reader.

We thought the author was trying to expose how easy people control other people and how showing bravery and not being afraid can help you when you don’t know what to do. We would rate this book a 8.4 out of 10. We are excited to read the next book, The Scorch Trials, and the rest of the series.