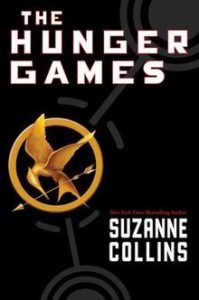 Recently, we finished reading The_Hunger_Games, a 374 page dystopian novel by Suzanne Collins. This is the first book out of a trilogy. Suzanne Collins got many good reviews from the book and was a New York Times bestseller for a while. She also won The Dorothy Canfield Fisher children’s book award, the Cybils Award for Fantasy and Science Fiction- Young Adult, The Hal Clement Award, and The California Young Reader Medal: Young Adult. These were won over a span of 3 years from 2008-2011. We read this book because we already knew it would be a good read. Half of us have already read the book, but no one complained about rereading it. And the first time readers in our group were excited as ever to read the internationally famous novel, The Hunger Games.

We’d say the genre of the book is dystopian. We claim this statement because the book has a very controlling government that uses the terror of the Districts to keep them in line and to assert their dominance. Which is shown in this quoted passage soon after the reaping starts, “Taking the kids from our districts, forcing them to kill one another while we watch – this is the Capitol’s way of reminding us how totally we are at their mercy. How little chance we would stand of surviving another rebellion.”(p. 18) This passage shows how Suzanne Collins writes, she emphasizes certain sentences by restating. But she restates them in ways that make them feel like completely different statements focusing on the same topic. The main character, Katniss Everdeen, is very protective of the people she cares about. Most specifically she tends for her mother and sister. She changes character, for example faking a love story with Peeta, the tribute from her District in the games with her. She does this to make the audience in the Capitol like her more and all the while makes her a more interesting character overall. The narrative voice is from Katniss’ perspective. This gives us certain views of characters at given times. She thinks about what others are thinking and why they are doing that, so she can understand the tributes and how to fight them. Like whenever Peeta did some big and important piece of the story Katniss would try to think of what his plan is based on what she already knows. This lets us indulge in her character much deeper. We all enjoyed this novel a lot and we’d give it a 9 out of 10.