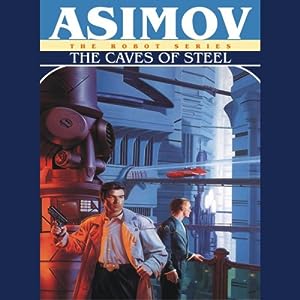 Recently, I have been reading a book called “The Caves of Steel” a 270 page science fiction book by Isaac Asimov, the inventor of the term “robotics” and a cornerstone of the science fiction genre.

The caves of steel is one of the first science fiction books ever written, having been published in 1953, over half a century ago, it has been been reproduced with a TV adaptation, a radio adaptation, and a game adaptation. I read this novel because I had just finished a prequel to the book IRobot, which gives some background knowledge on the futuristic world of “The Caves of Steel.”

In the novel, Earth is overpopulated with over 8 billion people living on it and with some nearby worlds colonized by Earthmen who are now called Spacers because they live in space. Everybody on Earth is now living in massive cities that have high population of both people, and at a growing rate, robots and on Earth there is one small city of spacers who want to make friends with the Earthmen. But one day, a spacer is murdered who was actively friendly toward Earth. So Elijah, a police officer, must team up with a robot to find out who the murderer is. After testing many hypotheses about who could have committed the murder, Elijah is finally stumped. Only one suspect remain on his list, and that’s his wife Jessie. Feeling that it is impossible for Jessie to have committed the murder, he is about to give up when all of the sudden his wife want’s to tell him something important. She tells him that she has committed an awful crime and is part of an organization called “The Medievalists” that killed the spacer and are trying to solve Earth’s overpopulation problem by tearing down the cramped cities. She tells him who one of the important members of “The Medievalists” is but with only a vague description so Elijah, using this information, arrests a man on a haunch who fits his wife’s description and questions him to find out who the head of the whole entire Medievalist organization is, but the man is stubborn and won’t answer. So Elijah promptly arrests the man and forces him to tell who head of The Medievalists organization is. Elijah gains the information he needs and arrests the leader of the organization who confesses to murdering the spacer.

I was surprised of course when Jessie confessed to being part of the medievalists.

Of all people, why was it the wife of a cop that would choose to commit to the evil group and their dark purposes? I believe it is because after a life filled with complete order and no rule breaking, Jessie overtime would become bored and even a little mischievous. These feelings of restlessness and deviousness would keep building until they got the best of her. From there on she would use the organization as an outlet for all of these unwanted feelings. Soon she would start feeling guilty and as that feeling grew she would want to tell her husband more and more until she finally did at the end of the book.

I’d compare Author of “The Caves of Steel,” Isaac Asimov, to the Author of “Ender’s Game,” Orson Scott Card. I compare these two amazing authors because they both have written science fiction books that are old. Asimov is one of the founder’s of Science Fiction by writing about robot’s way back in the 1940’s and continued to do so for a while. Once people saw how interesting this new genre was, it kicked off with Asimov leading it all. Orson Scott Card also made a major contribution to the science fiction genre with his book “Ender’s Game” which also is a old novel written and published in 1985. It is obvious why Isaac Asimov and Orson Scott Card reminded me of each other.

I’d say the theme of this book is that the only thing better than getting of rid evil is converting evil into good. I say this because throughout the whole book, Elijah is constantly trying to convince bad people to become good. One example of this is when Elijah has just captured one of the important members of the Medievalists named Clousarr and tries to convince him that tearing down cities and causing riots against the government isn’t the answer to Earth’s overpopulation but colonizing other planets is. Clousarr says “If we’ve got to, we’ll cut our population little by little, too.” and Elijah responds with “Back to the seed, to the egg, to the womb. Why not move forward? Don’t cut Earth’s population. Use it for export. Go back to the soil, but go back to the soil of other planet’s. Colonize!” These words change Clousarrs life and causes him to change to non-violent ideas. As you can see, the theme of this book isn’t to destroy evil, but change it to good.

Finally, I was intrigued by this passage, which occurs when Elijah is about to tell the Chief of Police or the Commissioner who the murderer is and how he figured it out. Isaac Asimov writes:

“Commissioner, this is all a careful and elaborate frame.”

The Commissioner stiffened. “Now, wait, Liji [ Elijah’s nickname]. Don’t strike out blindly. You won’t get any sympathy with that line of defence.”

“I’m not after sympathy. I’m just telling the truth. I’m being taken out of circulation to prevent me from learning the facts about the Sarton murder. Unfortunately for my framing pal, it’s too late for that.”

I loved this passage because it shows how effective bluntness is and short sentences. By using a perfect combination of the two, you are automatically intrigued by the passage and want to read on. As a reader, you want to know who the murderer is and how Elijah figured it out. As you read these few short sentences, you are surprised at how fast everything just happened and these blunt, short sentences create that fun surprise which is essential to a mystery book. This book was good and would rate it a 6 out of 10.