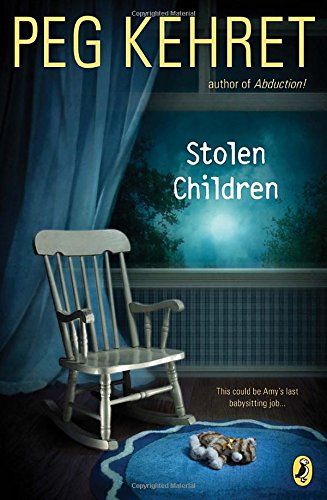 Recently I started reading the book Stolen Children and 165 page realistic fiction/ mystery novel by a children’s author , Peg Kehret who writes for kids ages 11 to 15. Stolen children was published in 2008 and has a 4.2 /5 rating. As I was browsing Mr. Jockers classroom library he recommended this book to me. I love watching mystery and suspenseful shows on TV so I thought this was a good choice. It was also a change since my first 2 letter essays were books about ocean animals. The book has a good plot with lots of suspense and mystery and keeps you on the edge of your seat as you read and think about if Kendra and Amy will make it home safely.

In the novel Stolen Children, a regular teen Amy has just recently taken a babysitting course and is on the hunt for a job. She is only 14 and a lot of people in her area think that she is a little young to start baby sitting.

But one day when Amy is sitting at home she gets a call from her neighbor Mrs. Edgerton whose mother has just broken her leg and is in desperate need of someone to take care of her 3 year old daughter Kendra since she does not feel comfortable taking her to the emergency room. Amy calls her mom and asks if she can babysit for 4 hours and her mom says yes! So she goes over and begins her job.

Amy and Kendra are having so much fun playing and having ice cream that Kendra needs a nap. While Kendra is napping Amy decides to take one herself, not a smart move. She wakes up to Kendra not in her crib. She goes crazy and starts running around the house yelling things like “Kendra lets have some more ice cream” (pg 14) When she does not find Kendra she is frightened that maybe she fell in the pool. Shivers went down Amy’s arms as she realized that she left the door unlocked and Kendra had been kidnaped. As Amy is about to call the police, the kidnapper comes in the house and takes her too.

I like how the author made the kidnappers Hugh and Smokey take Amy and Kendra and not just Kendra. I think by the author doing this it thickens the plot and keeps you on the edge of your seat. I know when I was reading I was asking myself questions such as “ If Amy is gone too then how will they be rescued”. I think the book would have been boring if they just took Kendra because then the solution would be too easy. It made the story have a twist which kept me intrigued.

I liked the way the author included many “ Words of the Wiser” moments . For example when Amy and Kendra were being kidnaped Amy said to Kendra “ It will be ok, i’m going with you, i’ll take care of you” (p.20) . Amy might of left the door unlocked when she was babysitting, but going with Kendra when she could of got away was a very responsible thing to do. Amy was very responsible and looked out for Kendra. Amy did things like make sure she had enough food and water to drink and that her and her favorite stuffed animal Tubby was safe. Amy always would keep telling Kendra it’s going to be ok and staying positive for her and Amy and Kendra developed a special bond.

In some ways this book reminded me of the movie IT not only because it was were scary and suspenseful, but because of the bonds the characters have with each other. In the movie IT when the evil clown Pennywise captured  Beverly, all of her friends worked together to save her. Even when they were about to get captured they would still fight. They would all risk their lives to save them and make sure that everyone was safe. Just like Amy did for Kendra.

“Smokey clenched his jaw . The Edgerton’s had called the police. They had disobeyed his instructions. Smokey skimmed the article, at the end it said, police have no clues to the kidnapper. Anyone with information is asked to call 911. Angrily, Smokey folded the newspaper and took it with him. He planned to return the kid unharmed, but now that the cops have been called, all bets were off.” (pg. 66)

What I like about this passage is it adds more things for the readers to think about and makes them want to read on. For example when Smokey figured out that the parents of Amy and Kendra have disobeyed his orders, and when he said all bets were off for returning them unharmed, I really began to wonder what he is going to do to the kids. I also enjoyed the describing words the author used such as clenched, skimmed and angrily. Added little descriptions like that really help to spice up the writing. I’m glad I read this book. Stolen Children is an 8 out of 10 for me. I look forward to continue reading.