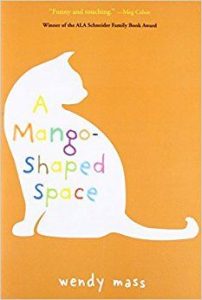 Recently, I finished reading A Mango-Shaped Space, a 270-page realistic fiction novel by Wendy Mass, an author of various young adult and children’s books. She was born on April 22nd, 1967 in Livingston, NJ.

A Mango-Shaped Space is Wendy Mass’s most successful book that she has written. It won the American Library Association Schneider Family Book Award for Middle School in 2014. I had already read this book a couple years ago, and I remembered that this book was a really good read so I decided to read it again. Now that I’m older, I understand and appreciate this book a lot more than before. I also chose it so I can fill up my realistic fiction section for my challenge.

A Mango-Shaped Space is about a girl named Mia Winchell who sees the world differently than others because words and sounds have color for her. In the book, Mia wants to know what is wrong with her, but she thinks that no one believes her and doesn’t know how. So, Mia ends up coming home one day and tells her parents about her “ability”. She first learned that she was different in third grade when everyone called her a freak because she wanted to use a different color for each number when solving an equation. When her parents took Mia to a doctor to finally contact a psychiatrist, he told her that she has a rare case called synesthesia.

After finding out about this, Mia wanted to join a special program for syntheses, the people who also have the same thing. But, while she is caught up in her new discovery about herself, she is going through a lot of drama. Her best friend, Jenna, was angry with Mia because Mia had never told her about her problem with colors. Mia is also assigned a group project and often doesn’t do her work because she is too busy with other things. So, after Jenna and Mia’s fight, Mia tells Jenna her feelings and they bond back together. She also uses her abilities to help contribute to the group project as an artist. Towards the end of the book, one night Mia sees a mango-colored trail when Mango goes missing. This leads to Mango, who was locked out cold in the night, shivering. Later that night, she realized Mango was not doing too well. He was shaking and wheezing uncontrollably, and Mia wanted for him to be safe and healthy. But, they couldn’t get to the vet because all the roads were closed because of the flood. So, they were about to take Mia’s dad’s helicopter, but it was too late because Mango had passed away. After days of Mia grieving, her dad says that Mango had not died to teach any lessons and that it was no one’s fault he passed. When Mango died, Mia could no longer see her colors until a few days later when she learned to accept and she found happiness again.

The genre of this book was realistic fiction. This was because Mia was a regular girl and what she was going through could happen to everyone. Synesthesia is a real thing and the book was based on her finding out her ability and learning what it is while handling other real-world problems. When she went to visit Jerry with her parents one day, he had told her what she wanted to know ever since third grade. “‘What you have, based on what your mother told me, is a condition that is harmless. It’s called synesthesia’(pg. 103).” He then explained to her what it was and the background-knowledge of it.

I liked the way the author included a lot of the character’s emotions, which made the perspective of the main character relatable and realistic. When they explained what was going on in the character’s mind after a big event happened, it was very interesting to read for the reader, who could feel what Mia was feeling. For example, when her cat Mango passed away one night in her dad’s helicopter, this is what she thought. “It felt like someone kicked me in the stomach, only a hundred times worse. This can’t be happening, this isn’t real, this is not my life (pg. 228).” When the author wrote this, the way they described how she was feeling made it easy to see how she was feeling.

I was surprised when Roger, one of Mia’s classmates, had told Mia he was color blind at the end of the book during gym class. Mia had thought about him being the only kid in the whole school who hadn’t asked her what color their name was. When she confronted him about this and he had told her, she had said, “‘We’re some pair,’ I tell him. ‘You don’t see enough colors, and I see too many’ (pg.253)!” This was surprising to me because it was ironic how they were the complete opposites, and I had never expected the reason Roger never asked Mia what color his name was was because he was color-blind.

Finally, I was interested in this passage, when Mia was in the helicopter with the rest of her family about to go to the vet in the flood, but Mango’s heart and wheezes finally stopped.

“Time has stopped. The only things that exist in the world are me, my father, and Mango. The tears are streaming down my face now and making Mango’s fur wet. My father tips Mango’s head back and breathes into his mouth and nose. Then he presses lightly against Mango’s chest with two fingers. My head is swimming, and I feel like I’m going to pass out. After a minute of this Dad looks up at me, his face ashen, and shakes his head. My eyes open wide, and the pain hits me in thick black waves. Then I scream loud enough to wake the dead. Only it doesn’t (pg.227).”

What I love about that passage was that it shows some of the author’s craft and their style of writing. It is very emotional and meaningful where it shows descriptively what the character is thinking and their reaction to the situation. I like how the author wrote “in thick, black waves” because I think it is very creative and helps add to the tone of the paragraph. This book is full of scenes like this when Mia comes to a sudden realization or something big happens that impacts her life. I’m really glad I re-read this book again this year and I think it is a 7.5 out of 10. I enjoyed reading this novel, and it taught me a lot of things.