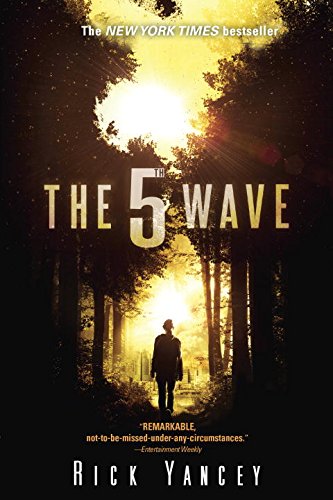 Recently, I have finished reading the book The 5th Wave, a 457-page science fiction novel written by Rick Yancey, who received awards such as the Michael L. Printz Honor award, winner of “Best Book of the Year” by Publishers Weekly, and was nominated for the Carnegie Medal.

The 5th Wave is the first of a trilogy of novels, including The Infinite Sea and The Last Star. The 5th Wave was a New York Times Bestseller. It is pretty famous, especially considering it was made into a movie by GK Films and Sony Pictures in 2016, three years after it made its worldwide debut in 2013. It was the winner of the 2014 Red House Children’s Book Award, it was a finalist for the 2014 Children’s Choice Book Awards for Teen Book of the Year, and it was a YALSA (Young Adult Library Services Association) 2014 Best Fiction for Young Adult novel, along with many other awards. I had seen the trailer for the movie a year ago and thought the plot sounded interesting. I decided to read it one day, especially because I love science fiction. I really enjoyed the novel and I was very glad that I decided to read it.

In the novel The 5th Wave, before the invasion begun, all Cassie wants to be noticed, to be good at something, not just okay, and to be noticed by Ben Parish, who had no clue she exists. But after the 1st Wave, Cassie’s life changes, forever. An alien apocalypse is upon them. Now, she has to do anything to survive, even kill. The 1st Wave shut all of the technology down. The 2nd Wave created tsunamis, killing all people that lived on the coasts, The 3rd Wave, a plague delivered by birds. The 4th Wave, Silencers, or snipers that “silenced” humanity’s sound. And the result? Seven billion people dead. All Cassie wants is to stay united with her family. Unlike most people, her family was able to resist the virus, but, all of the sudden, her mother gets sick and dies from the plague. This forces Cassie, her little brother Sammy, and her father to move to Camp Ashpit, an old military base that serves as a survivor/refugee camp. Cassie, wanting to protect Sammy, promises to keep Sammy safe and not let him die. A few days later, however, a big yellow bus pulls up to Camp Ashpit, guarded by soldiers, packed with kids, and were surprisingly, normal. Sammy, who was delighted to see something normal, was still hesitant to leave his family. But the soldiers demand that they save all of the children first, and Sammy is forced to leave. Some soldiers stick around to keep Camp Ashpit in order, and Cassie slips out before they can find her. When she returns, she sees her father lying on the ground, shot, and Camp Ashpit destroyed. Cassie is now alone, and needs to survive this invasion, knowing the soldiers are aliens, or the Others. She has to survive alone, without knowing who is human and who is Other. Her main rule: Trust no one.

The structure of this book has multiple perspectives, mostly from Cassie and Ben Parish (Zombie). Each “part” of the story, for example part 1: The Last Historian, has its own chapters embedded in, but throughout the whole “part”, there is one constant perspective. Personally, I like this structure because it shows multiple views on one situation. Also, it gives the novel some dramatic irony, when the reader knows something that they learned from another perspective in the book, but the other character doesn’t know. For example, during Part 1: The Last Historian from Cassie’s perspective, she learns that Colonel Vosch and his soldiers are part of the Others. During Part 2: Wonderland, Ben is visited by Vosch, and learns that Vosch is the leader of a group trying to fight against the Others. The reader, at this point, knows that Ben believes that he is fighting for the right side, the side for humanity, although he is not. Towards the end of the novel, Cassie and Ben unite, or should I say meet (remember Ben has no idea who Cassie is) and the storylines connect. This type of structure was effective and, in hindsight, made me more interested in the story.

I was confused at first, but interested by the author’s interpretation of an alien apocalypse, and aliens themselves. In my opinion, the plot line, I felt, was a realistic one, despite some major things, but really represented the possible, but impossible if an alien invasion were to happen. The book immediately opens up with this quote by Cassie, which made me interested as to what the Others were. “Aliens are stupid. I’m not talking about real aliens. The Others aren’t stupid. The Others are so far ahead of us, it’s like comparing the dumbest human to the smartest dog. No contest. No I’m talking about the aliens inside our own heads. The ones we made up, the ones we’ve been making up since we realized those glittering lights in the sky were suns like ours and probably had planets like ours spinning around them. (p. 1)”. This starts out the story, right off the bat, making the reader wonder, “who are these Others” and “what do they look like”, questions I definitely asked myself. So obviously, they weren’t green aliens in flying saucers shooting ray guns at us. I was wondering what made them so advanced. This gave me a different view on aliens, or any type of life in the universe, as a whole.

I liked the way the author made sure to repeat key ideas that were significant to show meaning. As a reader, I definitely pointed out many things from the text that were repeated again and again to show not only the importance but the influence on the text. For instance, the idea or run=die stay=die was often repeated. “Not my fault. That’s what I tell myself, It’s their fault. They’re the ones, not me, I tell the dead soldier. You want to blame somebody, blame the Others, and get off my back. Run=die. Stay=die. Sort of the theme to this party. (p. 99).” This idea was mentioned to signify, multiple times, that the Others knew how they thought, They knew what humanity would do. So they put them in a lose lose situation. They put humans in a checkmate in some sort (Ringer, one of the characters, always related to chess, like this, another repeated idea). These phrases often stuck with me the whole book and I was constantly reminded throughout the book of these ideas.

Lastly, I was interested in the passage where Cassie is stuck under a car during a snowstorm and was thinking to herself. Yancey writes:

“As ways to go, freezing to death isn’t such a bad one. That’s what I’m thinking as I freeze to death. You feel warm all over. There’s no pain, none at all. You’re all floaty, like you just chugged a whole bottle of cough syrup. The white world wraps its white arms around you and carries you downward into a frosty white sea. And the silence so silent, that the beating of your heart is the only sound in the universe. So quiet, your thoughts make a whispery noise in the dull, freezing air. Waist-deep in a drift, under a cloudless sky, the snowpack holding you upright because your legs can’t move anymore. And you’re going, I’m alive, I’m dead, I’m alive, I’m dead. And there’s that d*** bear with its big, brown, blank, creepy eyes staring at you from its perch in the backpack, going, You lousy piece of s***, you promised. So cold your tears freeze up against your cheeks. “It’s not my fault,” I told Bear. “I don’t make the weather. You got a beef, take it up with God.” That’s what I’ve been doing a lot lately: taking it up with God (p. 147).”

That I like about this passage is the humor in it, a strategy Yancey uses throughout the book to keep the reader interested. Also, this scene is not only funny, but it, to me, seems somewhat realistic, not that I’ve ever been in this experience before. Yancey uses Bear as some sort of object connecting Cassie to Sammy, and I feel this is what gets her through this situation. I am really happy I read this book. I rate it a 7 out of 10. I now, after reading the book, want to see the movie and see how they match up.

p.s. This is the trailer for the movie for The 5th Wave that came out in 2016