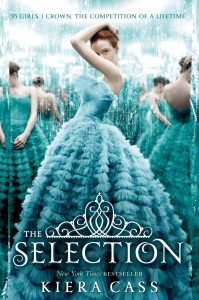 P.S. If you are reading this book right now there are few spoilers. Lucky they are not major spoilers. You’ve been warned 🙂 .

Not long ago, I finished reading The Selection. A 327 paged fantasy novel written by Kiera Cass. Kiera is an American writer of young adult fiction. She’s been writing since 2009 and continues to create stories from her head. She studied at Coastal Carolina University then later on transferred to Radford University. The first book Kiera published was the Siren.Then later went on to create The Selection series. That series has 5 books in it, plus two extra books to help the reader understand the series more. The main reason why I read it was because a lot of my friends were recommending it and were talking often about how good the book was. So I knew I needed to get my hands on it. To be completely honest it defiantly wasn’t a mistake.

In my novel, the main character, America, has this strong feeling of wanting to have a family with her boyfriend who is named Aspen. The big problem with that is Aspen’s raking in society is a six and America is a five. By law, they are not allowed to date each other. Also, Aspen doesn’t have enough money to support a family. So America starts to realize her dreams won’t happen. Aspen, on the other hand, wants the best for America, and he asks her if she’s willing to join The Selection. This caused Aspen and America to get into a big fight over The Selection. The argument made their relationship end. After the argument, America actually enters The Selection and Aspen found out America actually made it in. He was completely devastated. Once America made it into the castle she decided that she doesn’t want to fall in love with Prince Maxon, and she will secretly use him for the outstanding food and money for her family. Then a small problem accrued. America found herself falling for Prince Maxon as they got to know each other. Soon enough she blocks all memories of Aspen and lets herself slowly full in love with Maxon. Yet this may seem like the end of the book, but there is so much more. Keep reading to unfold all the layers of The Selection.

I liked the way the author made the dialogue between America and Maxon. Also, I feel as if America’s thoughts on problems that accrued to her were very realistic. Like the book felt real. For example, America went through a breakup and was quickly thrown in The Selection which broke her heart that she had to be away from her family, and even Aspen. If I was in her position and I had gone through a breakup I wouldn’t want the company of Prince Maxon, because that would be strange to try and fall in love with someone right away after a breakup. America would try to stay away from him, and she would even yell at him. This line from the novel really shows her “realistic” feelings; “Are you alright, my dear? he asked me. I am not your dear. I looked up to glare at him (pg. 113).” The word glare really paints an image of disgust in her eyes when Maxon said, dear. The thoughts she has, in the beginning, are the type of thoughts you expect her to think about. For example, “How did I get here? How had I let this happen? What would become of me here? (pg.113).” She’s was unsure of what she was getting herself into. That’s mainly because America never lived in a castle or had a prince talk to her. That’s why I’m saying the thoughts are realistic. The poor girl is clueless. Like I said that’s just the beginning. Later on, she develops into a different person.

The character development is very drastic. During the beginning of the book, America was very clueless about how Prince Maxon was. She jumped to the conclusion that he was spoiled and boring. I believe that she was so angry at Aspen for ending their relationship. Which may have caused her to be angry at Maxon without having a valid reason to hate him. Towards the middle of the story, America starts to develop weird feelings for Maxon. They start getting closer in their friendship. There was a secret sign between them that was tugging their ears. That would mean they needed to talk to one another. They had more dates and he would visit her a lot. This line is somewhat the turning point for America’s feelings; “Maxon, that wasn’t for the sake of the show. If you had asked me a month ago what my honest opinion of you was, it would have been very different. But now I know you, and I know the truth, and you are everything I said you were. And more (pg. 251).” She now knows Maxon as a person, and she starts to fall in love with him. It causes her to get jealous if he is on a date with one of the girls from The Selection. Towards the end, she finds herself longing for his love. So she goes further with Maxon which causes him to fall for her too. It’s just incredible that America hated Maxon, and at the end of the book she realizes she actually enjoys Prince Maxon.

I was surprised at all the drama that accrued in the novel. While I was reading the beginning of the book it was somewhat bland and not really fun to read. Then the next thing I knew America was kicking Prince Maxon where she shouldn’t, and that really caught me by surprise. I was truly expecting America to make it into The Selection. She wouldn’t fall in love with Maxon. And she wouldn’t get angry with girls from The Selection. I was very wrong here’s an example from the book that was just full of drama; “This dress was made for me, and I’m going to wear it. Next time you pick out your clothes, maybe you should try being yourself instead of me. Oh, wait, but maybe Maxon would see what a brat you are and send you home, huh? Without a second of hesitation, she reached up and ripped one of my sleeves off and walked away (pg. 239).” It was such a turn of events. We got to see the true colors from Celeste and we saw how angry America could get. The whole time I was just so surprised how one point things would be normal, and then everything would flip and everyone is at each other’s necks. That’s probably what kept me reading this crazy novel.

“The Selection was no longer something that was simply happening to me, but something I was actively a part of (pg. 327).”

This passage shows how America changed into a new person, and she has a new mindset on The Selection. She used to believe The Selection was nonsense. America would only use it for the money and the delicious food, but towards the end, she changed. She wasn’t doing it for the goodies anymore she found herself wanting to be with Prince Maxon. That’s why she’s saying she’s actively a part of it. America wanted to stay in The Selection. I didn’t expect America to be willing to stay. That’s is mainly why I picked this passage it’s the point of America’s life when she finally figures out her purpose. This book was truly breathtaking, and I defiantly see myself reading this whole series. I would give this book a 9 out of 10. Absolutely amazing.

Here is a 40 second book trailer for The Selection