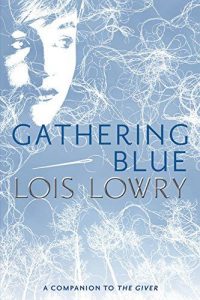 Recently, I finished reading the book Gathering Blue, a 241 page dystopian young adult fiction novel of the quartet The Giver, written by the famous author, Lois Lowry. As a young girl, she was shy and decided at ages 8 and 9 that she would be a writer. Because her father was an Army Officer (and dentist), she grew up in many different places around the world. For example, she was born in Honolulu, Hawaii, went to school for several years in Japan, and graduated high school in New York City. Some of her most well-known stories are Number the Stars, a historical fiction novel that takes place in Copenhagen, Denmark during World War II, and The Giver. Lois Lowry loves to read and is a talented photographer, and one of her photos is used for the cover of Number the Stars. Unfortunately, and currently, www.loislowry.com might be hacked, according to google search. More information on Lois Lowry can be found at https://www.biography.com/people/lois-lowry. I read this book because I had already read The Giver, and I found this one in a Barnes and Noble on a trip through Alaska, but I never had the chance to read it until now.

Kira, a young girl with a creative mind and special talent, wants her mother, but the closest they can be to each other is side by side in the field of leaving as Kira watches her mother’s soul leaving her dead body. When returning to her cott, which had been burned down because of her mother’s illness, a woman named Vandara turns on Kira. She and the other women want Kira’s land, but instead Kira is put on trial. Kira is physically flawed and now an orphan, and her civilization frowns upon and shuns the weak. Kira has no family or friends to offer help, except a young boy named Matt and his dog. When Kira learns that the council has plans for her, she discovers the truth of her civilization and the secret of the council guardians.

One part of the book I was surprised by was when Kira was not put in the Field of Leaving, but was instead spared because of her talent of weaving, sewing, and stitching.

“Jamison watched Kira as she remembered. Then he said, “Your mother had been teaching you the art.”

“Yes, since I was small,” she acknowledged aloud.

“Your mother was a skilled worker. Her dyes were steadfast. They have not faded.”

“She was careful,” Kira said, “and thorough.”

“We are told that your skill is greater than hers.”

I liked how the author uses description because it makes me feel like I am right there in the story. For example, these next several passages from the text were full of description, and Lois Lowry wove the words together perfectly, stitching an elaborate picture of each scene.

“Rows of oil lamps made the room bright, and each of the men had his personal torch behind him, illuminating stacked and scattered papers that lay on the table. They watched her as she made her way hesitantly up the aisle.” – pg. 26 (chapter three)

“There, on the left shoulder! Kira remembered that spot, where just last year some threads had pulled and torn and her mother had carefully coaxed the broken threads free. Then she had selected pale pinks, slightly darker roses, and other colors darkening to crimson, each hue only a hint deeper than the one before; and she stitched them into place, blending them flawlessly into the edges of the elaborate design.” – pg. 53 (chapter five)

“It was a long journey for Kira, dragging her twisted leg. Her stick caught at roots knotted under the earth of the path, and she stumbled from time to time. But she was accustomed to the awkwardness and the ache. They had always been with her.” – pg. 89 (chapter eight)

“The woman’s hands were gnarled and stained. She lifted one in greeting. She had few teeth and her skin was folded into wrinkles, but her eyes were unclouded. She walked nearer to them, gripping a cane made of wood and seeming unsurprised by the sudden visitors. She peered intently at Kira’s face.” – pg. 90 (chapter eight)

Lastly, I was interested in the passage when Kira said she was followed by a beast, a feared creature of the woods, known to kill men, on her way to the old dyer’s (Annabella) cott.

“You have a fear look to you,” the dyer observed.

“A beast followed me on the path,” Kira explained, trying to breath normally. The panic was beginning to subside but she still felt tense. “I could hear it in the bushes. I could hear its steps, and sometimes it growled.”

To her surprise, Annabella chuckled. The old woman had always been kind to her and patient. Why would she laugh at her fear?”…

I like this passage a lot because it makes you think. There can be so many possibilities to the conflict, and although I have finished the book, I still like to wonder and think about those possibilities (I’m a little strange). I really like how Lois Lowry wrote this passage, and overall, the whole book. I rate Gathering Blue a 9 out of 10. It was spectacular, and I can’t wait to read it again.

Happy reading to you all,