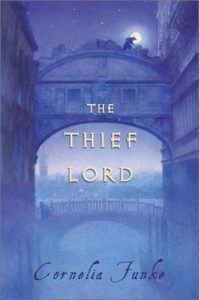 I recently finished reading The Thief Lord, it is 180 page fiction mystery novel. It is written by German writer Cornelia Funke, & was published in English in 2002. Cornelia Funke has written many popular books, some of which have turned into movies. Infact, she worked as the producer for the movie adaptation of her book Inkheart. I chose to read this book because I needed an independent book for ILA class, & this looked like a good choice for it.

Set in Venice Italy, this story is about a gang of runaway children living off the streets. Living in an abandoned movie theatre, & with help from her friend Scipio AKA “The Thief Lord”, they hide away from their parents. With the help of Victor Getz, a well known detective, Esther & Max (Their Parents)  attempt to find her children in the city of Venice. After investigation, Victor discovers their hideout and attempts to sabotage them. Soon discovering that they are in search of a wooden lion wing that is priceless, he is held hostage by the gang, only to escape the next day. He swears not to tell anyone about their hideout if they do not steal the precious wing. They go along with their plan and steal the wing from Ida Spavento; a Venetian resident. Caught red-handed by Ida, she tells them the story of the wing & its true power. It has the ability to change a person’s age. In search of the merry-go-round the wing belongs to, Ida allows them to have the wing only if she can go with them & follow down the buyers of the last piece…

I was surprised by how the fact once the gang had captured Victor, they were so against killing him. In this scene they discuss chucking him into the canal. “”Oh, yeah?”Riccio stared moodily at the star-embroidered curtain.”But I don’t want to find something better! Why don’t we just chuck him into the canal? Then we wouldn’t have to worry. I Mean, why was he snooping around here anyway?” “Riccio!”Hornet looked at him in horror. If they really had ruined their lives, & they were forced to move out of their beloved home, then why didn’t they just kill him. It was the easiest option, & some people decided it was the best idea they had.

I like how the author included a moment of major character change when they all find out that Scipio is a fraud. “Victor gasped.”Blown-up toad?Thief Lord?I’ll tell you something!”He made a threatening step toward Riccio. Mosca and Hornet moved protectively between them,but Victor just pushed them away. “You’ve fallen for the biggest toad who ever lived. Why don’t you take a little trip to the Fondamenta Bollani number 223.That’s where you’ll learn the truth about the Thief Lord. Everything You’d Want To Know, or maybe wouldn’t want to know.” (p. 80). This was a big change because throughout the entire story they looked up to Scipio as their king or their ruler. They always thought he was a their savior, but in reality he was lying to them the entire time. They then thought that they had been lied to and immediately rejected him. This proves that they only looked up to him because he “stole” things & provided money for them.

“One of my favorite passages of this book takes place on the last page.This is after Esther adopts Ernesto, believing that he is a perfect child. ”Esther carried on believing for quite awhile that he was the most wonderful child she had ever met until she caught him stuffing her most precious earrings into his pants pockets and then discovered in his room an entire collection of valuable items that had mysteriously disappeared.Tearfully Esther sent him off to an expensive boarding school where Ernesto became the terror of his teachers and fellow pupils. Dreadful things were said about him:that he forced other children to do his homework and to clean his shoes, that he even encouraged them to steal things, and that he had given himself a name that everyone had to call him. It was “The Thief Lord.”” (p. 190). This passage was very interesting to me because it shows how Ernesto may be able to trick Esther into thinking that he’s a wonderful child, but in reality, he is just as corrupt & money hungry as before.