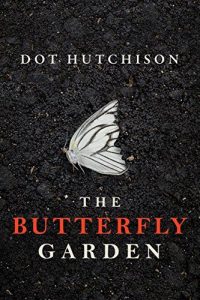 I am currently reading The Butterfly Garden, it is 276 pages and is realistic fiction, it was written by Dot Hutchison, who has a background in theatre and a love for surfing the web, and anything renaissance.

The Butterfly Garden is a pretty well known book with more than 100,000 copies sold, because of popular demand, Dot Hutchison came out with a book sequel called “The Roses of May.” It came out not too long ago on may 23 2017, the sequel also has good reviews and there is speculation that there will be a trilogy.

I started reading this book when I needed a fiction book for ILA, I never really read too many books about these kinds of topics so at first I wasn’t feeling it but, I am very happy that I started reading the book. Right now I am about ⅔ of the way finished with the book and I plan on finishing it by the end of the week because I’m really enjoying it and anticipating reading the sequel.

In the book, Inara, whose name is changed to Maya by the psychopathic gardener, is kidnapped in new york where she lives in an odd apartment with 8 other girls and works at the same restaurant as them too. She’s always had a hard life being brought up by parents who don’t care, living with her grandma who dies, and being abused by almost everybody she knows. She eventually runs away to the city where she gets a fake ID and lives life the way she wants to. Until of course, she is kidnapped by the gardener, when she wakes up, she is beyond confused. The gardener has an odd mindset where he believes that he owns these girls, he takes girls that he finds attractive, he won’t take anyone under the age of 16, and tattoos butterfly wings on their backs. They are locked in a large complex of plain rooms, a tattoo room, his personal rooms, and a huge outdoor garden encased in glass with no way of escape. The odd thing is that he is obsessed with their beauty which he believes has an expiration date, when the girls turn 21, he takes them, puts them in glass, pours resin in which ultimately kills them, and displays them in the hallway where they’re preserved and their wings are shown. Thankfully Inara is broken out of the cruel garden along with the other surviving girls, the book is based on flashbacks of her stories from garden, her childhood, her old life in new york city, and her present time conversations with FBI investigators Victor Hanoverian and Brandon Eddison.

I was surprised and shocked about Inara’s ability to not cry, even upon arriving, and after all the obsessive abuse she’s put through by the gardener and his son, she never sheds a tear. I would think that she lost the ability to cry at a young age because she never truly had a good quality life. “‘You are quite unlike any of the others,’ he said eventually. I had bits and pieces of most of the others in me, The only thing that made me truly different was that I was the only one who never cried. Who never could (pg 113).” Even in her early childhood flashbacks it’s really noticeable how much she really doesn’t care, she learned to not trust anything and I think because of that she’s both really strong and weak for not being able to cry.

I was confused and kind of angry when Inara was talking to the gardener’s son Desmond, his father had just introduced him to the garden but he still didn’t know the true intentions his father had because the glass displays were hidden. Desmond really believed that the garden was a safe haven for the girls and that his father was a hero for taking them in and giving them shelter. He started to doubt this because of how unhappy and forced the rehearsed conversations he had with the girls were, he had already been talking to Inara for a while and asked her if she was here against her will, every time he asked her she could have had him report it to the police, i wanted so badly for her to confess and I know she did too but I can understand why she would be sceptical because Desmond is a suck up to his father.  “‘I just can’t make sense of this place.’ ‘Given that it doesn’t make sense, that’s understandable.’ ‘So you’re not here by choice?’ I sighed and rolled my eyes. ‘Stop looking for information you have no intention of actually using.’ ‘How do you know I won’t use it?’ ‘Because you want him to be proud of you,’ I said sharply. ‘And you know if you tell anyone about all this, he won’ be. Given that, what does it matter whether we’re here by choice or not (pg 157) ?’” This is from a part where desmond is asking  Inara if she is being held against her will, this specific part is a perfect example of how badly she wants to tell him but she can’t because she’d be risking her life and the other’s too. It reminds me of times when i’ve had to keep big secrets and wanted to blurt them out except her situation is more serious than anything i’ve ever had to keep.

I liked the way that the author used a words of the wiser moment in the book, it really exaggerated the fact that Inara doesn’t care or have any more hope of escaping the garden. Inara was acting as a wiser character who had experience with the garden by introducing the new butterfly to her new lifestyle. She says “Just be careful with hope, a little is fine. Too much is crippling (pg 102).” The advice that Inara was giving the girl was supposed to teach the girl how to manage as easily as possible, and to just surrender to the gardener and make the best of what you have.

“‘You don’t think that at some point the butterfly names became real?’ ‘Their legal names, then.’ ‘Some of them.’ ‘We could have been notifying their families by now,’ says Eddison. ‘Why didn’t you tell us this earlier?’ ‘Because I don’t like you,’ she says bluntly, and he yanks the photos out from under her hands. The girls cocks an eyebrow. ‘You really believe knowledge brings closure, don’t you?’ She asks. She might be incredulous, or mocking; Victor isn’t sure (pg 151).”

I love this passage because it showcases the character’s personality without being super forward about it, it makes you think. The way that Eddison quickly pulls away the photos shows how angry he gets, and the way she bluntly says she doesn’t like him highlights how straightforward she is. So far, this book has been a 9/10 for me, it is a top contender for my favorite book, but because I haven’t finished it yet, It will be a 9 for now.