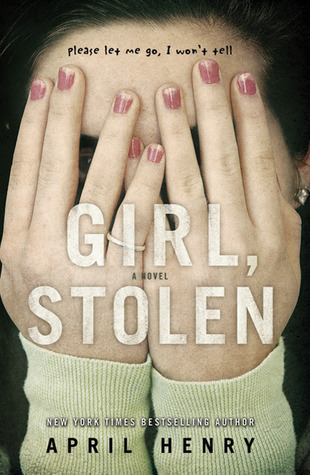 Recently, I just finished reading Girl, Stolen, a 213-page Realistic Fiction book by April Henry.  April Henry wrote multiple mysteries for adults and young adults and eventually became a New York Times Bestseller. When watching the news, April saw a story about an eighteen year old girl who was blind and accidentally kidnapped, which influenced and motivated her to write the novel, Girl Stolen. I read this book because I thought it seemed very interesting and many of my friends had read it already and loved it. I learned that you should always check or read the inside of the back book cover before you read the story because it could have information on why the author wrote the book.  After reading Girl, Stolen, I did read the questions and answers at the back of the book where I found out that the author did a lot of research into the real case of the kidnapped girl. This gave me so much more detail on why the book was written, and that the book was based on a real life situation.

In the novel, Girl, Stolen, a boy named Griffin wants to steal a car to sell it for parts, but he doesn’t realize a sixteen-year-old named Cheyenne Wilder, is sleeping in the back. After steals the car, he realizes that he also kidnapped Cheyenne and starts to panic. Cheyenne wants Roy to let her go, but he is afraid she will tell on him. She explains she is blind and doesn’t even know what he looks like; however, he is still afraid to let her go. Not knowing what to do, he drives the drive to his house where they break cars down and sell them for parts. Roy, Griffin’s father, finds out that Cheyenne’s dad is the president of Nike and they have a lot of money so he decides to hold her for ransom. The big question is; WIll Cheyenne survive?

I noticed the way the author used questions to show the main character’s thoughts and to make me feel like I was in her head. During the book, Cheyenne would ask herself questions about what she should do in certain situations. For an example, Cheyenne was asking herself, “How long did she have?” “How long until they came back (p.71)?”  I really liked the way the author did this because it made me almost pretend I was Cheyenne and think about what I would do in the tough situations and also what was going to happen next in the book. I liked how the author added very small details that probably nobody would really notice or remember, but during the book those little details became something bigger and more important. For an example, in the beginning of the book Cheyenne mentioned not bringing her guide dog but it was very brief, but as the book continued the reader realizes that it was a much bigger deal and was life changing. If she brought Phantom that would have changed things.

Finally,  I was interested in the passage, when Cheyenne kept questioning herself over and over again, constantly asking herself, if she brought her guide dog Phantom, would this change things? This signpost is “Tough Question”because the character asks herself a question that could change her life and makes  the reader think about it. Henry writes, “But if Cheyenne had had Phantom with her, this creepy guy wouldn’t even have gotten in the car, Now here she was, blind, kidnapped, tied up, and going who knows where with a criminal. Her cell phone was gone. And she was very sick (p.23).“

What I love about this passage is that the author really makes you think about that small detail she mentioned about Cheyenne not having her guide dog, I love how the author made that such an important part of the story. It makes the reader think to themselves while reading the book.The author used so many unanswered questions at the end of each chapter in the book.  I liked the way the author used this question,

“ But if Cheyenne couldn’t see, how would see escape (p. 15)?” This had me thinking throughout the whole entire book and asking myself questions. I’m very glad I read this book, Girl, Stolen, and would give a 10/10. I’m very excited to read other books by April Henry.