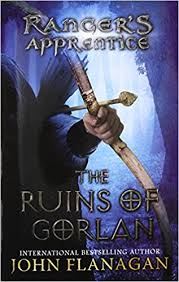 Yesterday, I finished a book that I have read many times. It is called The Ruins of Gorlan it is a 282 Page fantasy book that was written by author John Flanagan. John Flanagan is famous for his fantasy writing and for the series the Ranger’s Apprentice. He has also created another series of companion to the Ranger’s Apprentice and is called The  Brotherband Chronicles.

I read this book because I was really interested in fantasy and I was running out of options of books to read I was looking for a long series that I could really dig into and I found the Ranger’s Apprentice series. The first time I read this book it was because a lot of the people who I trusted with books we’re recommending this series to me and I thought I should try it out and it really has brought me close to reading books.

In the novel The ruins of gorlan,  Will is picked to be a Ranger’s Apprentice, as he is working with Halt his master harvest day comes up he goes to have lunch with his friends that were with him while growing up as orphans. Horace (Wills Bully) comes late and starts to be mean to everyone as he does, he and Will get into a fight. The baron of the fief (the town) Stops the fighting but there’s still a grudge between them. Halt, Will, Horace, Sir Rodney (Horace’s master) and some knights go hunting down a gigantic boar things go wrong and Will and Horace are left to fend for themselves. Horace becomes petrified and stands there while Will distracts the boar and let Horace go to safety, Will gets injured by the boar but Halt Luckily takes out the boar right before Will gets trampled. The news comes that two lords have just been killed, Halt suspects that kalkara a killing machine is behind both of these deaths. Halt, Sir Rodney, Baron Arald and Will are to chase down these animals once they get close to the kalkars. Both animals unexpectedly turn onto the group  Rodney, Halt And Araold are rendered useless while Will fights the kalkars. How Will he defeat this beast alone it took three people just to take out the first one.

The Author John Flanagan, makes the plot build up so easily then appear out of nowhere is amazing he did this many times in the book such as the boar and the kalkars. It makes you want to keep reading and you do. He also leaves a little extra on the end of the book to hook you again for the next book.

I liked the way the author made each character have a backstory it seemed like you knew the character but you don’t. In the early parts of the book you don’t know anything about Will and his friends, but it seems like you know them and then at harvest day you see them for who they truly are, it is really amazing.

I  was surprised at the end of the book you see Will decline the chance to become a knight which was his dream. In The book Gilan a sort of mentor to Will says “the grass is always greener on the other side” it is true. Will always wanted to become a knight but he declines his dream because he found something that he already likes. It shows you can’t just focus on only one thing.