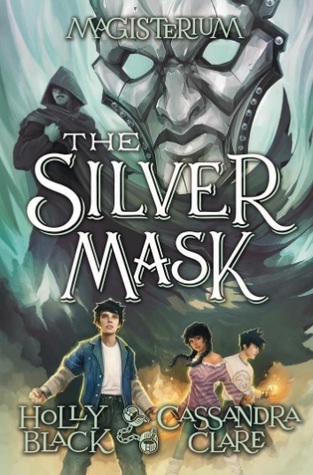 I recently finished the book The Silver Mask, a 232-page fantasy book. The book was not only written by one author but two! These two brilliant authors are Holly Black and Cassandra Clare. Holly Black is the bestselling author and co-creator of The Spiderwick Chronicles and Cassandra Clare is the author of the bestselling YA series, The Mortal Instruments, The Infernal Devices, and The Dark Artifacts. They also both live in Western Massachusetts, just a ten-minute drive from each other. Once I discovered that this book came out, I wanted to get my hands on it because this is the fourth book in the Magisterium series and the others books before this one were amazing.

In the book, Cal is the most feared person in the mage world. After figuring out that he has the soul of Constantine Madden (a person who wanted to bring back the dead) he is thrown into jail. Only when he has broken out of jail, does he realize that the power to use Constantine’s plans or not is in his hands. On top of that, being imprisoned by Master Joseph, (a servant to Constantine) and being forced to bring back your friend from the dead, or die yourself, doesn’t really help either. Though Call decides to bring Aaron (his friend I mentioned earlier)  back from the dead, it just complicates everything more. Now the Magisterium (magic school/ counsel) is on the back of Call’s heels and a war is threatening to break out and Call is in the middle of it all. Good or evil, Call knows what he must do to stop all chaos from breaking loose.

If I were the author/s I would have added more description throughout the entire book. For example “He looked absolutely furious (pg. 219).” This to me is just like a simple, oh he looked furious with no big deal to it. I would have changed it to something like this; Alex turned to Call, his face twisting into pure anger. He was furious. That gives me a vivid enough description to picture it in my head. An even better one would be something like this; Call turned to look and see what Alex’s reaction was. He finally knew what the death stare was, literally, a death stare. Alex’s face was a picture of pure rage and anger looking straight at Call, burning through his soul making Call regret what he just did. That right there is a great description! (I might just be saying that because I wrote it, but still a good description, right?) A good sense of the emotions from the character and overall a good picture painted in the reader’s head (hopefully). The descriptive language of a book is what really draws you into the book.  I just wished the writers had made more use of descriptive power in this book.

At the end of the book (Spoiler alert now and later on), I was really grateful for the decision that Aaron made. He gave up his last way of “living” for Call. See as I mentioned earlier, Aaron is the person who was raised from the dead by Call. Call did this by putting a piece of his soul into Aaron’s dead corpse. Though he seemed living he was different.  At the end of the book, Call saved the world from chaos breaking loose by putting himself in danger and almost dying using too much magic. Being on the verge of dying, Aaron put back the piece of Call’s soul that he gave up, allowing for Call to live and Aaron to die all over again. This is the part of the book when Aaron is putting Call’s soul back into Call. “Call felt it again, the touch deep inside his chest. His injured soul calming. The sense of something being restored to him, something he’d only now known was missing (pg. 225).” Reading this made me sigh with relief. Though I was sad yet again that Aaron was dying, I was really glad that making the choice he did allowed Call to see yet another day.

There was a passage that I was quite calm in which interested me. The passage is about Call going back to the Magisterium with his friends and hearing something quite interesting. “They had almost reached her when Call heard it. A tiny whisper in the back of his head. A voice, fond and curious and friendly, so familiar he felt the echo of the soul tap all the way through him, and almost stumbled. I think I really am back this time, Call, Aaron’s voice said. Now what the heck are we going to do (pg. 230)?”

This passage gave me a sense of nice serenity. It also gave me interest too. This passage of the book was able to give me a feeling. It shows that the authors are able to sort of get their point across. Enough to make the reader feel these feelings in that part of the book, whether anger, calmness, etc. Many sections of the book get their point across to give me these emotions. I think this is what really intrigued me about the book. The Silver Mask is a 5 out of 10. Let’s find out where my reading adventure will take me next!