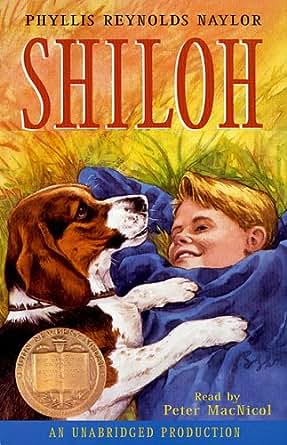 Recently, I finished reading Shiloh, a 144 page realistic fiction book by Phyllis Reynolds Naylor, a John Newbery Medal winning author. She is also well known for a popular series for younger children known as the “Alice” series, containing 12 different books, all with the name “Alice” in the title. The first book from this series was published in 2002, 11 years after Shiloh was published.

After being published back in 1991, Shiloh was honored with the John Newbery Medal in 1992, just one year after it was published. Shiloh was a “dark horse for the award.” This book had so many great reviews, as featured on the back cover. “A gripping account…young readers will rejoice…”says Kirkus Reviews. Also, Publishers Weekly states, “This heartwarming novel should win new fans for the popular Naylor. I read this book because I was looking for a Newbery winner to read. I was looking through the bucket and Shiloh caught my eye. I remembered that, a while back, someone mentioned to me that Shiloh was a very well written, interesting novel. I decided to take a chance on the book and took it out of the classroom library, and I don’t regret doing that at all. I now second the opinion of the person who recommended it to me and it has now become one of my favorite books ever.

At the beginning of the novel Shiloh, Marty wanted to let the beagle, later named Shiloh, that found his way to him in the hills and followed him back home stay in his house until the owner is found. But his mother and father were not going to have the dog sleepover in the house. They also do not have enough money or food to feed a dog as well as themselves. So, Shiloh just sits outside the house, looking through the window and waits.

The next day, Shiloh’s owner, Judd Travers, a mean neighbor of Marty, stops by Marty’s house looking for his dog. He wants to find it and get it back into his possession, but when he does Marty knows that he will beat him and kick him for running away and causing a hassle. So, Marty, reluctantly and not without asking to keep the dog, hands him over to Judd Travers.

After that, Shiloh returns back to the original spot where Marty first found him, which he assumes is because Judd has been hitting him and kicking him. This time, Marty really wants to keep him. He really likes Shiloh and doesn’t want to see him in pain, but his parents won’t let the dog stay with them. So instead of bringing him home, Marty builds a pen up in the hills. He brings portions of his food and drinks to Shiloh daily and takes him on walks without anyone else in the family knowing. There are two other books after Shiloh that I look forward to reading and diving deeper into the story of Shiloh and Marty.

I was moved when Marty stood up to Judd Travers. Marty used the fact that Judd illegally shot a deer as a way to persuade Judd into letting him keep Shiloh. Marty was always scared of Judd but he stood up to him in the end. Marty said bold things like, “…The new game warden won’t make any allowance even if the deer was eating in your garden. You just don’t shoot a deer out of season no way. ‘Specially a doe (p. 116).” Marty also stands very confident in front of Judd. He says, right to his face, “So what are you going to do?…Shoot me (p. 116)?” I was moved by this because it showed that Marty was really willing to put his life on the line for Shiloh. He wasn’t afraid to be confident, even though he knew that Judd Travers could kill him right on the spot with the rifle he had in his hand. Not many other people would have done that for a dog. It showed that Marty really cared for Shiloh and does not want to see him being mistreated. This could also be a teaching moment in the book. You need to stand up for what you believe in, just like Marty stood up to Judd.

I liked the way the author used many memory moments throughout the course of the novel. These flashbacks helped create a clear picture of what the character is like. One flashback stood out to me especially. Marty remembers seeing a dead dog up in the woods with a bullet hole in the side of it’s head. He believes that Judd was the one who did this and feels uncomfortable handing Shiloh back to him with this image in his mind. “I’m thinking how, ‘bout a year ago, I was fooling around up on the ridge and come across a dead dog. A dead beagle with a hole in its head…But the more I think on it now, I wonder if it was Judd Travers shooting a dog on purpose—shooting one of his own dogs that didn’t please him (p. 38).” This one really stood out to me because the author had a real purpose for including it. At the end of the book, Marty refers back to that situation when he is standing up for himself.  This highlights the author’s ability to add important and meaningful memory moments. It also helps make the theme more noticeable. This makes the story 10 times better.

I’d say that the theme of this book is bravery. Evidence of this can be seen throughout the book. For example in the middle of the book, Marty takes Shiloh and puts him in a homemade pen that he built to keep him hidden from Judd Travers. “I string the fencing around the trunks of three small trees, for corner posts, and then back to the pine tree again where I fasten it with wire…Tell him he’s my dog now, and I’m not never going to let anybody hurt him ever again… (p.44). This is showing that Marty is being really brave by keeping the dog hidden from all of his family and Judd. Character development also helps this theme grow. The author, Phyllis Naylor, made Marty change from a shy, timid boy, into a brave young man. The theme of this book really played a large role in the story and with developing the main character, Marty.

Finally, I was interested in this passage, when Marty reflects on lying to his family about keeping Shiloh. “If what Grandma Preston told me once about heaven and hell is true, and liars go to hell, then I guess that’s where I’m headed. But she also told me that only people are allowed in heaven, not animals. And if I was to go to heaven and look down and see Shiloh left below, head on paws, I’d run away from heaven for sure (p. 73).”

This passage stuck out to me because it focused in on the deep love that Marty has for Shiloh and shows how far Marty is willing to go for Shiloh. I think that Phyllis Naylor is sneaking a mini flashback and teaching moment. I think that Phyllis Naylor is trying to teach the readers that you should follow your heart and do what you think is right. Marty thinks it is best for Shiloh and the rest of the family that they don’t know about him and Shiloh. This passage really showed this to me and that is what I love about it so much. I’m glad that I took Shiloh off of the shelf and decided to read it. It was a very good book. I would rate it a 9 out of 10.

Here is the trailer for the movie Shiloh!