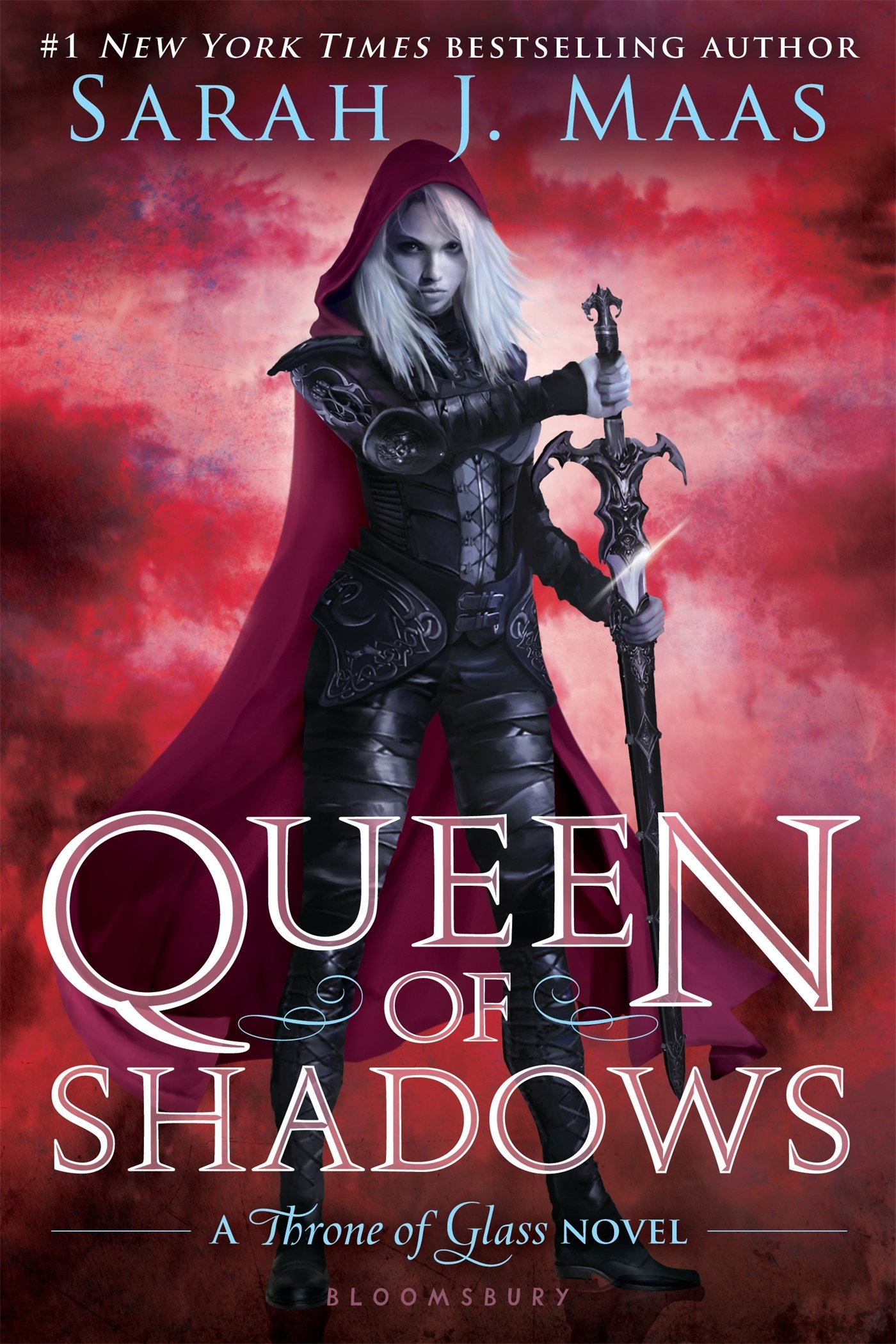 Recently, I finished reading a 645 pg. Fantasy story called Queen of Shadows by New York Times and USA Today bestselling american fantasy author, Sarah J. Maas. Queen of Shadows is a compelling story that’s just begging for you to read, but you must read the previous 3 books in order to read this one. This series is full of magic and adventure. Survival is key in this book. EVERYONE is basically a walking target even if you’re innocent. All these characters need to mind what they do where they do it and how since they intertwine with the plot. One wrong move, and their chance of survival becomes slimmer. The main characters have their own quest to fulfill, titles to claim, and to take back what’s been taken from them. Since this is fantasy, there are a lot of things that can happen and Sarah J. Maas happens to have a great imagination. There are always new surprises waiting for you.

This story is told in third person, but changes to another character’s point of view once the other is done. The main characters are Aelin Ashryver Galathynius, the rightful Queen now princess of Terrasen, Rowan Whitethorn Galathynius, Prince of Doranelle, Chaol Westfall, Captain of Guard for the King of Adarlan, Dorian Havilliard, Prince of Adarlan, Manon Blackbeak, Wing Leader of the Blackbeak Clan also known as the Thirteen, Aedion Ashryver, Aelin’s cousin, Lyssandra, and Elide Lochan, the rightful Lady of Perranth. Aelin is a 19 year old teenager who is the long lost Queen of Terrasen. She was assumed dead when the King of Adarlan burnt her home to the ground after murdering her parents in their sleep, but she got away and ran for the stream like her maid told her to. Later on, the assassin chased after her to the stream and she fell in and was unconscious. Since the stream was so cold, the assassin assumed that she would freeze to death, but thanks to her power to control fire, she was able to keep herself warm enough until the Kind of Assassins, Arobynn Hamel, found her floating in the stream and took Aelin in under his wing and trained her to be the most feared assassin in Adarlan, Ardalan’s Assassin. Since Aelin didn’t want Arobynn to know her true identity, she used the name Celaena Sardothien. Later on in the story, on a mission to kill, she was set up by Arobynn to get captured and sent to Endovier, a salt mines labor camp in Adarlan filled with prisoners. Aelin stayed there for a year and then was summoned by the Prince of Adarlan, Dorian Havilliard, to be his representative to be the King’s Champion in a competition that the King of Adarlan is hosting. When the competition is happening, Aelin gets to know Chaol Westfall and Dorian a little better and then she can sense something brewing in the King’s eyes just by looking at his movements since she is trained by the King of Assassins, she always takes note of whatever is in her surroundings. As her relation with Dorian and Chaol improves, something comes up with the competition or should I say someone is killing each competitor one by one. Aelin gets a really bad feeling about this since all magic was stripped from Adarlan and the dead bodies don’t look like something or someone on Earth who killed them. Then, towards the end of the second book, Chaol and Dorian realized who Aelin really is and how Adarlan and her home are absolutely mortal enemies. By that time, Aelin went to Wendlyn with an excuse that she is on a mission to kill the royal family in Wendlyn, but instead to train with Rowan Whitethorn, Prince of Dardanelle and somewhat related to Aelin, under Queen Maeve’s command to learn how to control her powers and learn to shift into her true form. Fae. Aelin and Rowan train and go on missions together and then later on, since Rowan is bound to the now Queen of Terrasen, Maeve, Aelin made a deal with Maeve so he could free Rowan from their blood oath and give Aelin the blood that Rowan wanted so it wasn’t forced. Now, Rowan is part of Aelin’s court that she is gathering. Meanwhile, he cousin, Aedion who is like a brother to her, is under the wrath of the King of Adarlan and is captured. Aelin goes back to Adarlan without Rowan since she knows that shifting to his human form is too hard for him and rescues Aedion right from under the King’s nose and then makes a run for it. When everyone is all healed of their injuries, Rowan comes to Adarlan to find Aelin, longing for her company and Rowan’s equal in strength opponent arrives who is with Queen Maeve’s court comes to warn them of upcoming events and also to mess with everyone. A lot of bloodshed and violence occurs shortly afterwards. There is a war brewing and coming fast. Will Aelin and her companions survive or perish?

I’d say the theme is this book is to fight fire with fire. I think this because in order to win and get what you want in this world of demons and many many other mythical offsprings, plus humans, you need to know what your opponent is thinking. Aelin and her court(Rowan, Aedion, Lyssandra) are vicious. Even though there are only four people in total, Aelin’s court is very powerful. Lyssandra is a shape-shifter. Rowan, Aelin and Aedion are fae, mythical creatures that are somewhat like vampires, but more pleasant and they are allowed in the sun. Only Aelin and Rowan posses magical gifts of wind, ice, and fire. Aelin’s court has torn apart entire kingdoms in record time. Rowan alone is equal to about 100 mortal soldiers. His immortal enemy and him have battled so hard that they’ve tore apart a whole kingdom in less than a day. When Chaol got caught during a rescue attempt, Aelin had to fight her way out of his mistake. Aelin went head to head with one of the strongest Ironteeth witches, Manon Blackbeak, and almost Manon almost perished in the process. “Manon Blackbeak lunged, as swift and deadly as an adder. Aelin darted back, dodging each swipe of those lethal iron nails. For her throat, for her face, for her guts. The witch was so damn fast. And one hell of a fighter(pg.480).” They were fighting in a temple and on the last strike, Aelin bolted out of the collapsing temple, leaving Manon wounded so that she could barely stand up. Suddenly, Asterin, Manon’s cousin and her Second of Thirteen let out a scream full of fear, agony, and plea for Manon to get up and survive. Aelin heard that wretched scream  and ran back for Manon because she had heard a scream like that before; from her own lips in fear of losing someone. Because of saving Manon, now, Manon owes her enemy a life debt.

,This book reminds me of the fairytale Cinderella in some ways that are hard to explain. Cinderella also started with a nice life, but then everything went downhill as she lost her parents like Aelin did. Cinderella is under the wrath of her evil stepmother and stepsisters just how Arobynn Hamel made Aelin’s life a living hell for the next several years of her life and then got sent to Endovier for a year as a slave/prisoner. Another reason why Queen of Shadows reminded me of Cinderella was because when Cinderella went to the royal ball, she was disguised as someone else other than herself and Aelin spent about ten years of her life being Celaena Sardothien so people don’t know her true identity of her family’s royal history. The only thing is that Aelin’s disguise is on a much larger scale. At the end of Cinderella, she gets her happy ending, but Aelin doesn’t get her’s quite yet. She still has a long way to battle her way through happiness.

I noticed that the author likes to describe scenes in depth. “Bright, open air, the wind roaring in her ears, then- Aelin landed on the open glass bridge a level below, her knees popping as she absorbed the impact and rolled. Her body shrieked in agony at the slices in her arms and back where bits of glass stuck clean through her suit, but she was already sprinting for the tower door on the other end of the bridge(pg.554).” In this part of the book, Aelin is attempting to rescue Dorian from the Vlag prince that’s inside him. Dorian is currently trapped inside of his own body, unable to control it. The Valg prince inside of Dorian now posses his body and is attacking Aelin. Since Dorian’s magic is raw which means he is the heart of it, he can use it anytime and anywhere he pleases unlike Aelin’s. In Adarlan, the King banned magic and locked it in a tower which later on Aedion and Rowan blow up, freeing magic upon the whole land. With that accomplishment, Aelin’s magic flows back into her and she attacks and defends herself more easily. Sarah J Maas uses powerful words to describe the characters. In the part of the book above, it had the words “shrieked”, “agony”, and “knees popping” expressing the pain that the character is in right now. You can tell that Aelin is really hurt and is in agonizing pain.You can tell that Aelin is risking a lot of her life to save the life of the Crown Prince of Adarlan who still has little hope left for him that he can still be rescued from the Vlag Prince in him.