Recently, I have been obsessi 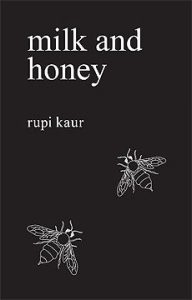 ng over Milk and Honey by New York Times bestselling author,  Rupi Kaur. And I apologize in advance for how long this letter essay is, but let me tell you I am truly obsessed with this book.

Published in 2014, when Kaur was just 21 years old, this was her first book. At just 5 years old, she began pursuing art after her mother handed her a paintbrush and said- paint your heart out. According to her website (linked in her name above), she views life as an exploration of her artistic journey. After completing her degree in rhetoric and professional writing at the University of Waterloo, Ontario, Canada, she published Milk and Honey. It was quickly picked up and published by Andrews McMeel Publishing in 2015. Since, then well over a million copies have been sold, and it graced the New York Times bestselling list for over a year.

In her work, she writes with no uppercase letters and periods being the only punctuation. Kaur, being of direct Punjabi descent, modeled her writing after the Gurmukhi script to honor her culture. Also, that she enjoys the equality of letters and that the style reflects her worldview. Her written work is meant to be an experience that’s easy to follow for the reader, with simple drawings to elevate her words.

This collection of poems deals with different pains, following a storyline. It deals with abuse, love, heartbreak, race, and femininity. In the book, Rupi was abused as a young girl. This is primarily in the chapter, the hurting. Kaur explains her feeling about her abuse and how they have affected her (feeling silenced, held back, etc.). Then, when she meets her significant other in the novel, who was not named, her emotions seem to flip. This was expressed in the loving. Then, after he leaves her for someone else, she hits a rock bottom, creating the breaking. She returns in the end for the healing, where she closes with a stronger version of herself.

I liked how the author varied the length of her stanzas in Milk and Honey. By doing this, she kept the reader interested. One example of this is pages 192 and 208. On page 192, she includes a long poem. It reads,

i don’t know what living a balanced life feels like

when i am sad

when i am happy

i don’t smile, i beam

when i am angry

i don’t yell, i burn

the good thing about

is when i love

i give them wings

such a good thing

tend to leave and

you should see me

when my heart is broken

i don’t grieve, i shatter

Then on page 208, the author includes a much shorter poem.

she was the music

but he had his ears cut off

This contrast between poems is one of many things that kept the writing interesting for the reader.

I was moved by a poem from the healing,

“i want to apologize to all the women

i have called pretty

before i’ve called them intelligent or brave

i am sorry i made it sound as though

something as simple as what you’re born with

is the most you have to be proud of when your

you are resilient or you are extraordinary

not because i don’t think you’re pretty

you are so much more than that”

This was one of my favorite poems because it’s so different from the rest of the book and it’s so empowering. I don’t mean this negatively, but the rest of the book is self-centered, on what she is feeling. This poem is about others. She focuses on what she has done to others, and for once, emotions that don’t regard her. It’s almost refreshing because the poem is all this heavy and plaintive. This is almost a lighter poem, while it is still meaningful.

It is also so interesting because personally, it is something I had never thought of before, and it definitely changed my point of view. Calling someone pretty is no longer correct, and it doesn’t justify the person. Just let that sit for a moment. I mean, I completely agree with that statement. We all have been through so much, and all that people may say is that we are pretty? As the author says, “your spirit has crushed mountains.” But I think what makes this poem, out of all the ones in the book I’ve read, all 8 times through (I told you I’m obsessed), is that a. It never loses its power and b. You can actually apply this to your life. I know I will. You may not be able to apply, “she was a rose in the hand of those who had no intention of keeping her.” to your everyday life, but you can start making changes with this.

I’d compare Rupi Kaur’s writing style in this book to D. H. Lawrence  (1885-1930), a British novelist, essayist, and poet. Lawrence’s better-known works are novels, however, his interests were first in poetry, 1909 being his first published. According to poets.org, Lawrence’s work, “treats the physical and inner life of plants and animals; others are bitterly satiric and express his outrage at the puritanism and hypocrisy of conventional Anglo-Saxon society.” His poems in this era were influenced by Ezra Pound and the Imagist Movement. The Imagist movement worked against Victorian poetry and romanticism. Instead, imaginism emphasized simplicity, clarity, and precision through the use of exacting visual images. One of the founders of imaginism along with Ezra Pound is T. E. Hulme, another English philosopher, and poet. In his essay, “Romanticism and Classicism,” Hulme wrote that the language of poetry is a “visual concrete one… Images in verse are not mere decoration, but the very essence.” (A Brief Guide to Imagism ). Rupi Kaur commonly used visual images and draws in both books, further connecting her to this era and its poets. Nearly all of her pages have these visual representations of her poems, but it is showcased on page 81. The poem reads,

i always let him

tell me i am beautiful

and i half believe it

he will catch me

and that will be the death of me

With this stanza, she included a picture of a person diving off a diving board, only to land flat on the ground, dead as one may presume. This image adds a visual for the reader about the kind of relationship she is in with her significant other. Kaur dives into this relationship, which is shown by the diving board. This shows the credulity of the character and its innocence as a ‘lover and a dreamer’

Furthermore, D. H. Lawrence’s works consisted of reflection upon the dehumanizing effects of modernity and industrialization. In these reflections, he would lecture on emotional health and vitality, spontaneity, and human instinct. In his poem shades, he speaks of the darkness in the love between him and another individual.

There came a cloven gleam

To flicker in me.

And so I seem

To have you still the same

In one world with me.

In the flicker of a flower,

In a worm that is blind, yet strives,

In a mouse that pauses to listen

Shadow; yet it deprives

Them none of their glisten.

In every shaken morsel

I see our shadow tremble

As if it rippled from out of us hand in hand.

As if it were part and parcel,

One shadow and we need not disassemble

Our darkness: do you understand?

For I have told you plainly how it is.

This piece sounds very similar to many of Kaurs, because they are both very dramatic and emotional works. They can relate in this way, along with that they both have similar phrasing throughout.

My passage of choice is from the breaking, in the stage where she recovers from all of her pain throughout the book, including but not limited to her abusive childhood and her heartbreak.

“what i miss most is how you loved me. but what i didn’t know was how you loved me had so much to do with the person i was. it was a reflection of everything i gave you. coming back to me. how did i not see that. how did i sit here soaking in the idea that no one else would love me that way. when it was i that taught you. when it was i that showed you how to fill. the was i needed to be filled. how cruel i was to myself. giving you credit for my warmth simply because you had felt it. thinking it was you who gave me strength. wit. beauty. simply because you recognized it. as if i was already not these things before i left you. as if i did not remain all these things after i left. (pg. 138)”

I chose this stanza because it is also one of my favorites. Gregory Cowles from the New York Times writes in a review, “Much or Kaur’s appeal comes from artless vulnerability.” I completely concur with this assessment, for most of the book. That’s why I like this poem, it is self-empowering. In the beginning of this poem she is very vulnerable, especially in the first phrase, ‘what I miss most is how you loved me.” But as you continue reading, she gets stronger and stronger, homologous to the book. I think what makes Kaur such a great author and poet is that she writes with a lot of emotion. This is evident with all of her poems. This whole book is very human, and I think that is what makes it so good. While you may not be able to relate to what is happening, you can feel her emotions, her pain, and her love.

I would rate this book a 10/10, as Milk and Honey is definitely my new favorite book.