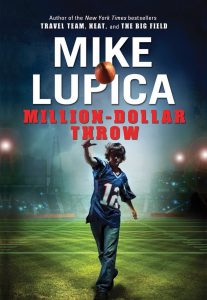 Dear readers of the blog,

Recently, I have been reading the book Million Dollar Throw by Mike Lupica. The genre of this book is fiction, and it is 244 pages long.  Author Mike Lupica is a newspaper columnist who is best known for his sports writing in the  New York Daily News. He wrote novels such as Travel Team, Heat, and Summer Ball.  These books have made the New York Times bestseller list. Lupica lives with his family in Connecticut  and can sometimes be found visiting area bookstores promoting his books. My ILA teacher recommended this book to me because I like sports.

In the novel Million Dollar Throw, Nate, an 8th grade boy, wants to win a throwing contest at a Patriots game so he can win a million dollars.   Along the way leading up to the big day, he faces many situations that makes it hard for him to stay positive  and focus on his big throw.  For instance, Nate sees his parents getting really mad and upset because his dad  lost his job and are losing their home.  Also, his best friend Abbey is losing her eyesight any may never be able to do what she loves, painting. All these factors make it hard for Nate to focus on the throwing contest.  Winning a million dollars would really change his life. Nate wants to work hard at football but he doesn’t want to get injured  before the contest.  Usually after school or football practice  Nate will throw the football with his friend Pete  in order to practice even more.   All  Nate wants to do is win the contest in order to fix all the problems he has in his life.

I liked the way the author just didn’t say Nate’s parents are mad but  he shows why they were mad because they lost their jobs. This reminded me of the hurricane that hit houston texas and the Houston texans a NFL team and the houston astros a MLB team had a fundraiser to help people who lost their homes and stuff that hurricane harvey destroyed. I was surprised at they way they auther ended they book. This was not a predictable conclusion.

A passage in the book that really shows they authors craft  was, “Coach said,”the biggest myth in the world is the one about dumb football players. That comes from people who’ve never played this game. Because once that ball is snapped, guys all over the field have about two seconds, tops, to decide where they’re going and what they have to do. So you’d better be prepared in this game, ‘cause it comes at you fast. Dumb football players? No such thing.”p43  What I like about this passage is how they author uses a myth or assumption about something to prove his point.  What may look to someone as dumb is not. People who never played a game or done something in their life may view it as easy or stupid but in reality it is very hard and difficult.  This can be the case in many situations in someone’s life, It goes with the saying, “never judge a book by it’s cover.” People should never judge people or their jobs without knowing all the facts. There really isn’t a easy jobs I know of.

I rate this book a 7/10 because I like sports books and I also like books that have some type of contest the character has to win to save his life and others he cares for. A reason why I gave this book a 7 instead of a 10 is because the setting changes a lot and I sometimes got confused.  I would have to reread a section in order to make sure I knew where something was taking place.