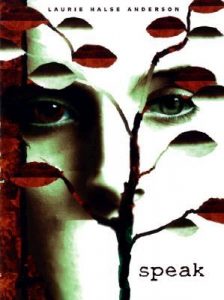 Recently I’ve been reading this book called Speak a 198, mystery book by Laurie Halse Anderson. This author is an American writer best known for children’s and young adult novels. She received the Margaret A. Edwards Award from the American Library Association in 2010 for her contribution to young adult literature.  She has earned numerous state and national awards. When she was a little girl she was really interested in writing.

She learned many things from her teacher. Her favorite genre was historical fiction. When she was a teenager she liked fantasy and fiction. For years, Laurie has loved writing, but had considered it little more than a hobby. It eventually dawned on her that people would pay her to write and she became a freelance reporter. She also began to write all types of books and accumulated several inches of rejections letters. In 1996, her first book, Ndito Runs, was published. This book was recommended from Mrs. Aponte and after reading it the back I was hooked. The book sounded very interesting

This girl named Melinda want everybody in the school to like her, but they can’t because she called the police at a party. So everybody in the school hates her for that. Melinda Lost all of her friend but there was one friend that she made whis is david so she had faith in david. Melinda want to have a happy normal life but she can’t have one because she can tell us what exactly happened at that party so she goes silent mode and doesn’t speak to anyone. Mr.Freeman wants melinda to talk so that he can help her but she does not want to take the advice of going to him to talk. She is having a rough time in school.what will she do next.

The main character of this is a girl that is very shy and has lots of emotions going on in her head that she is hiding away from everybody. She feel like she is lonely and she has lost all of her closest friend for example Heather. Heather was one of her closets but then she did not want to be friends with her, for example “ I was new and didn’t know anyone and that was really, really sweet of you, but I think it’s time for us both to admit that we….. just….. are…… very…… different (pg.105)”. She was really sad that she left but it did not work out.

This book reminds me of the book Girl Stolen because the girl named Cheyenne was blind and she was having a rough time to escape the people that  kidnapped her. Melinda from Speak is having that same trouble, she is trying to escape what happened to her at a party but she can’t because she is having a rough time trying to tell somebody why she called the cops at the party.

I was angry when the main character of the book started to say bad stuff about herself, for example “ I’m supposed to be grateful for a face full of zits, hair in embarrassing places and feet that grow a inch a night (pg.124)”. I was not thinking that she would be saying bad stuff about herself. In real life it does not matter what you look like, you’re beautiful the way you are. It doesn’t matter what other people say about you, be yourself everywhere.

I was interested by this passage; “ They want me to speak (pg.113)”. It shows that there was a problem that was happening to her. This passage that the author wrote shows that the author want you to make predictions what is happening and making you more excited to find out. She was in the guidance counselor and she was just sitting there no talking. She was missing school some days and also getting bad grades. But she did not want to say why she was doing it. Something happened to her but she is scared and shy because probably she has never experienced it before.