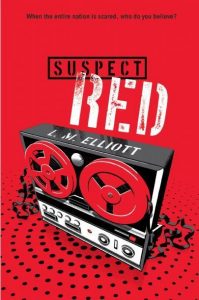 Everyone should Read Suspect Red: A 290 page historical fiction by LM Elliott. LM Elliott is a Washington based journalist and the author of Under a War-Torn Sky, a Jefferson Cup Honorable book. Suspect Red takes place in the 1950’s but was written in 2016 so at the beginning of each chapter there are political cartoons and current events from the time! I think that this is a excellent way to get 2016 readers in to the shoes of a 1950’s teen in a fun, creative and fresh way! I chose this book at the book fair, I chose it because the bright red color with big faded white Top Secret like letters, spelling out Suspect Red. Once I got the chance to pick it up, read the summary and the first page it was a miracle I could put it down.

In Suspect Red Richard (the main character) is a book-loving, friendless, loyal American citizen, or at least he would like to think. Richard’s dad is a G-man in the FBI, Richard looks up to him and loves to imagine him breaking down doors, and busting “pinco-commie spies!” Richard enjoys reading classic books like Robin Hood and Of Mice And Men but when Senator Joseph McCarthy (who his father idolises) gets into power he starts “blacklisting” books that Richard enjoys, ordering them to be removed and burned. Then Vladimir (or as Richard and everyone else calls him: Vlad) moves from NYC down the street the two soon find that they like all the same music, books and movies. There is only one problem, Richard moved from Czechoslovakia, a Communist nation. And his dad works in the State Department, McCarthy says that State Department workers are “pinco-commie loving reds.” Despite this Richard hangs out with his only friend and acts like there is nothing suspicious about him at all. One day at Vlad’s Easter Sunday party Terisa, (Vlads mom) asks Richard to bring a stack of towels to her room, when he gets there it is dark but he can make out a map and a lot of papers in a weird language. Later when he goes to tell Terisa that he has to go home he finds her talking a weird language and she immediately hangs up when he walks in. He acts like he saw nothing and said goodbye to her. When he gets home he tells his dad. Later that week he finds two men in trench coats, sunglasses and briefcases walking out of their house and his dad tells him that he did a great deed for his nation and their house is bugged. About a month latter Terisa invites Richard to NYC to visit friends and to watch a premier of their friends play. Since Richard has never really been out of DC he jumped at the chance. Before he went his dad said “Act like a G-man there, be on the lookout for any suspicious people or suspicious things that Terica is doing BUT act normal and don’t let your guard down.” Vlad and Richard were aloud to go to the Statue of Liberty, by themselves! They got to go to the crown and everything. When they got to the place Theresa said she would meet them Richard saw her with two suspicious men. He couldn’t really hear their conversation but he caught “Czechoslovakia” “family” “honor” “CCCP” “FBI.” Richard told his dad first thing when he got back. Will Vlad and his family by caught by the FBI and thrown in jail or is this just a misunderstanding?

I liked the way the author provided comics and info about what’s going on at the time because it provided a fun way to show just how paranoid the nation was with the whole “red scare.” It also provided specific comics about what was going to happen in the next chapter. For example before one chapter there were a bunch of agents in a classroom, cutting the USSR off the classroom map, interrogating the teacher, going through the trash, looking under floor tiles and looking for “pinco books”
The main character was extremely torn and didn’t really know who to trust. The author threw in a twist that added to Richard’s torn feelings: his idol and dad being a FBI agent and always telling him how “pinco-commies” could tear this great nation apart and that the USSR could nuke us any second!

One quote that I found interesting is Senator McCarthy: “When a great democracy fails, it will not be because of enemies from without but rather enemies within…” I think that that quote perfectly set the tone for the book. Not did it just describe what the nation was going through it also explained what was going on with in Richard!