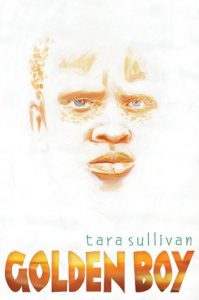 I recently finished reading the novel Golden Boy, by Tara Sullivan. This 368 page realistic fiction book is detail oriented, heart warming, and includes high stakes which officially climax in the middle (somewhere 160 pages in). These character traits and the summary on the back cover made me eager to read the novel. It all begins in Tanzania, a remote country located where deserts cross and connect with other deserts. A land of safaris, major tourism, and handfuls galore of exotic mammal specimens. An overly populated space full of spirituality and voodoo, or the Wganga in the Swahili language. These sacred beliefs and powers are brutal – full of sacrifice and blood. Many body parts and bones appear to bring good luck or wealth in the future. Wgangas get money by selling these believed to be ‘sacred’ items for high prices, only catered to customers who are able to do a return trade with goods can afford it in their cashed currency. Within the novel, many Tanzanians have different purposes or objectives for using the black magic. Some of which are as follows: beauty, increased or sudden wealth, luck in winning an election for town or even state governor or elector, etc. Luck isn’t magically sprouted from the ground like beans or plants, it is not harvested, instead it is killed. Local Wgangas seem to believe that cat blood or body parts of an albino person will bring forth an abundance of good luck. This brings us to the main plot of the story, a 13-year-old boy named Habo, running from his life in Mwanza and Dar es Salaam, large towns where the storytelling takes place. Although this is not a true story, the author, Tara Sullivan, was inspired to write a novel based on true and current events happening throughout Tanzania and its surrounding borders. According to scattered sources, 98% of albinos die before age 40 (medium.com, advantageafrica.org) due to many reasons including skin cancer and monthly belief induced killings. Within the novel, hundreds of hardships are faced and Habo has to make a decision that will affect his life forever.

Living on the outskirts of Tanzania, Habo travels from city to city in hope for a better and brighter future. Originating in his home city of Arusha, Habo attempts to fit in and make friends, which doesn’t go so well. As a zeruzeru, he is treated as if a cactus, go near him and you’ll get pricked. In many superstitions or beliefs, albinos can be either positive or negative luck wise. Children and parents knew him, and many others like his kind, to be bad news. The saying ‘looks don’t matter’ is an inaccurate phrase to use for this situation. Personalities, feelings, and grades don’t comply. He will never look like anyone else, or be like anyone else, thus letting Hab learn overtime to except himself and, at the same time, let go of others’ judgmental opinions. After leaving Arusha, due to the family’s house and farm foreclosure, Habo, his mother, and his siblings journey to his Aunt’s house in Mwanza. The 72-hour journey to Mwanza includes half a bus ride, leaving the tireless chore walking for the remaining miles. Along the way, the family comes across suave Alasiri, a flirtatious illegal elephant poacher, who takes quite a liking to Habo’s elder sister, Asu. Alasiri tricks Asu into giving them a ride and telling him their location in Mwanza. A special Wganga gives Alasiri specific orders to capture and murder Habo for luck and cashed payment. Once Alasiri comes knocking at the door, it is only a matter of time before he finds Habo. Big decisions form in the cloudy and scattered are of thoughts located in Habo’s brain. How can he escape? Running through the woods, and hitching rides in trains, he heads 1,500 kilometers away from Alasiri, right into the grand city of Dar es Salaam. While making new acquaintances and becoming a blind man’s apprentice, time flies and still his family has not found him. Neither has Alasiri… yet.

Some varied techniques Sullivan used when writing the novel Golden Boy were suspense, detailed character description, conflict appearance, and flashbacks. Most of these are pretty basic, and as any writer might state, they are the first techniques you learn. To advance in a further explanation, the few skills listed are key in literacy drafting and writing. Suspense helps grow your interest in the novel to a specific point that it would result in your finishing the book probably a day earlier than planned. If not that, you would most likely end up going out of your way to buy more books from that specific author. Thinking about it, each book bought from an author gives money to the author. If you buy ten books from one author, instead of shaking up or varying the authors you read from, it all goes to them. This technique is perfect, because you never know what is to come in the plot line as a reader; and as an author, your cash flow increases by a lot.

I really liked how Tara Sullivan based the plot off of real events, yet not quite making it that true story non-fiction genre. The research was comprehensible but subtle, meaning that you could tell the research was there, it just wasn’t as obvious or in your face. As mentioned in the introduction, life threatening events like the albino killings mentioned in the story happen on a day-to-day basis in Tanzania. Organizations such as Asante Mariamu and The World Health Organization fight for albino lives and rights in the East-Africa areas and regions. This is a growing problem thousands face and struggle with. As of April 2016, citizens of Malawi faced trials upon 4 albino killings, including one which ranges someone as young as newborn baby. Trafficking, murdering, and human hunting should be illegal. Yet, in East-Africa so many offenders do this, it is hard to keep track and arrest them all. This is why so many protection programs exist; most albinos aren’t even aware of the danger they are in. The majority of albinos are either too young to understand what’s happening, or spend their whole life in hiding not knowing when it is okay to come out and actually live their life.

Bringing it back to the skills displayed within the novel, author Tara Sullivan’s style of writing tears at your heart, trying to pull your emotions to pieces, and at the same time it can make you smile with just the right amount of warmth. Just the way the words dance and glide across the paper connects you to the struggles everyday people face on the unexpected twisty road of life. This makes me think that more writers should explore this creative type of writing, especially younger students who are majoring or minoring in journalism. Sullivan forms the image that even if you have never been to or haven’t heard of Tanzania, you can still picture the restaurants, people, streets, and surroundings within the story’s setting. Reading her books, your senses come alive. With every touch the character applies, you can feel it. Every smell seems to leap off the smooth pages and becomes overwhelming. The smell of the hot, steaming ugali sitting and waiting to be consumed in it’s oblong shaped bowl. Bell-like ringings of the Dala-dala sound, letting everyone know its arrival. And, lastly, the jagged, heavy, deep incisions located on the surface of the wood – screaming for its edges to be sanded and smoothed in a repetitive motion. All of these sensory impacted bits and pieces are important to the setting and plot.

To put an end to this essay, a concluding note per say, there is one passage that really stood out when reading the novel Golden Boy. Before we get to that, here is some insight on what is going on in the story at the time of the chosen paragraph. At this point, Habo is waiting for his train’s arrival to Dar es Salaam. Sitting on an old recycled box, he begins to pick at a half-melted and gooey chocolate bar whilst drinking an ice cold Coke. The passage is:

“The chocolate memories come from the early days at home, when Mother still smiled easily. My father had left us, but the farm was still doing well. For two years in a row that I remember, Mother bought a bar of chocolate for us to share on the holidays. Each small bar had four squares. Mother gave one square each to Asu, Enzi, Chui, and me. At Chui’s insistence, we each broke off a corner and shared it with Mother. (200 range)”

This paragraph stuck out to me like a spoon in a drawer full of forks. It was easy to find and remember, because of the author’s technique, a flashback. Flashbacks are really insightful, in a way that you never knew much about the character’s childhood days until the moment you read the flashback. The unique part about this flashback is that in the author’s secretive way, she already established that the chocolate Habo was nibbling on sparked the special memory. She did not mention that since at the time – he and his family were apart – the other reason could be his longing for family and to be more dependent than independent. Golden Boy is a 10 out of 10. This is due to its action-packed, suspense filled, and current event based story line.