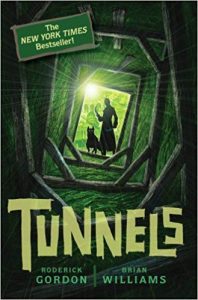 I recently finished reading Tunnels, it is 180 page fiction mystery novel. It is written by British writer Roderick Gordon, and author Brian Williams. It was published in English in 2007. Roderick Gordon has written many popular novels, including the more books in the Tunnels series. Roderick grew up very shy. He drew and wrote as a child, and had a short story published when he was only twelve years old. I chose to read this book after I accidently found it while in search of another novel.

Set in modern day England, two boys (Will & Chester) go in search for Mr. Burrows, Will’s father who has recently went missing. They discover a hidden tunnel behind a bookshelf, and find a passage leading to an underground colony, where it is thought his father. They are taken prisoner, and it is found out that Will’s real family is from the colony, and his mother real mother escaped the colony when he was a child. Will is rescued from prison, whereas Chester is locked up. Will and Cal (His real brother), plan to escape the colony and rescue Chester before his sacrifice. Caught red-handed, they are forced to leave Chester behind once again. What happens next? Read to find out. This book is full of twists and turns, and will leave you hanging off the edge of your seat.

I was surprised by the fact that after the first failed escape when Chester was left behind, he was not killed or sacrificed. It may have been a bait for Will and Cal, but they did not continue with their plan “So you know it is to be tonight” the second officer said with the suggestion of a smile”(p.330). He was referencing his sacrifice being that night. This also displayed how the citizens of the colony enjoy this event with contradicts them putting it off. Another example of contradictions in this novel is when Cal & Uncle Tam state that they love the colony, and that Will would have a great time with them. Only a few chapters later, and Cal is escaping with Will.

I wish that in Will, Chester, & Cal’s original escape it would’ve been with Mr. Burrows. This would’ve completely changed this part of the story. In my opinion it be a much more detailed and interesting section. If Will and Mr. Burrows met again Will would be in disbelief. There would be emotions like happiness, betrayal, & greif. This would also create a very uncomfortable moment because of the new knowledge that Will grew up without his birth family. In fact he was born in the colony. Will’s father would have a lot of explaining. From why he left with no trace to why Will was lied to his entire childhood, this would be an action packed section. “.  .  . and Dad’s down here  .  .  .  somewhere   .  .  .  The idea blinked through his mind as brightly as a neon sign”(p. 303). Will was greatly missing his father and would even risk falling to his death to see him. “Now’s my chance. It occurred to him in a flash”(p.303).

One of my favorite passages in this book is on page 144 and page 98. In these two passages the authors use a technique that I have only seen in a few stories. During these sections of the story, the text is completely changed to match the scene currently happening. When an old letter is being read in the story the font is changed to something worn down and old. It shows how to transform words into an image in your head. Instead of seeing the same text, you see something that matches its surroundings. It also creates flare and grabs your attention. When you are constantly reading plain text having something out of the ordinary is very good at keeping your attention. “I have recently become aware of a small and  .  .  .  in  .  .  .  incongruous grouping of interlopers coming and going among the general public of Highfield…”(p.98)

The thing that I really enjoyed about this passage is the way the author kept me reading. Up until this point I was starting to lose interest, but by adding this technique, it had gained my attention back. I’m glad I read this book, and I rate it a 5/10. I will not be rereading this book.