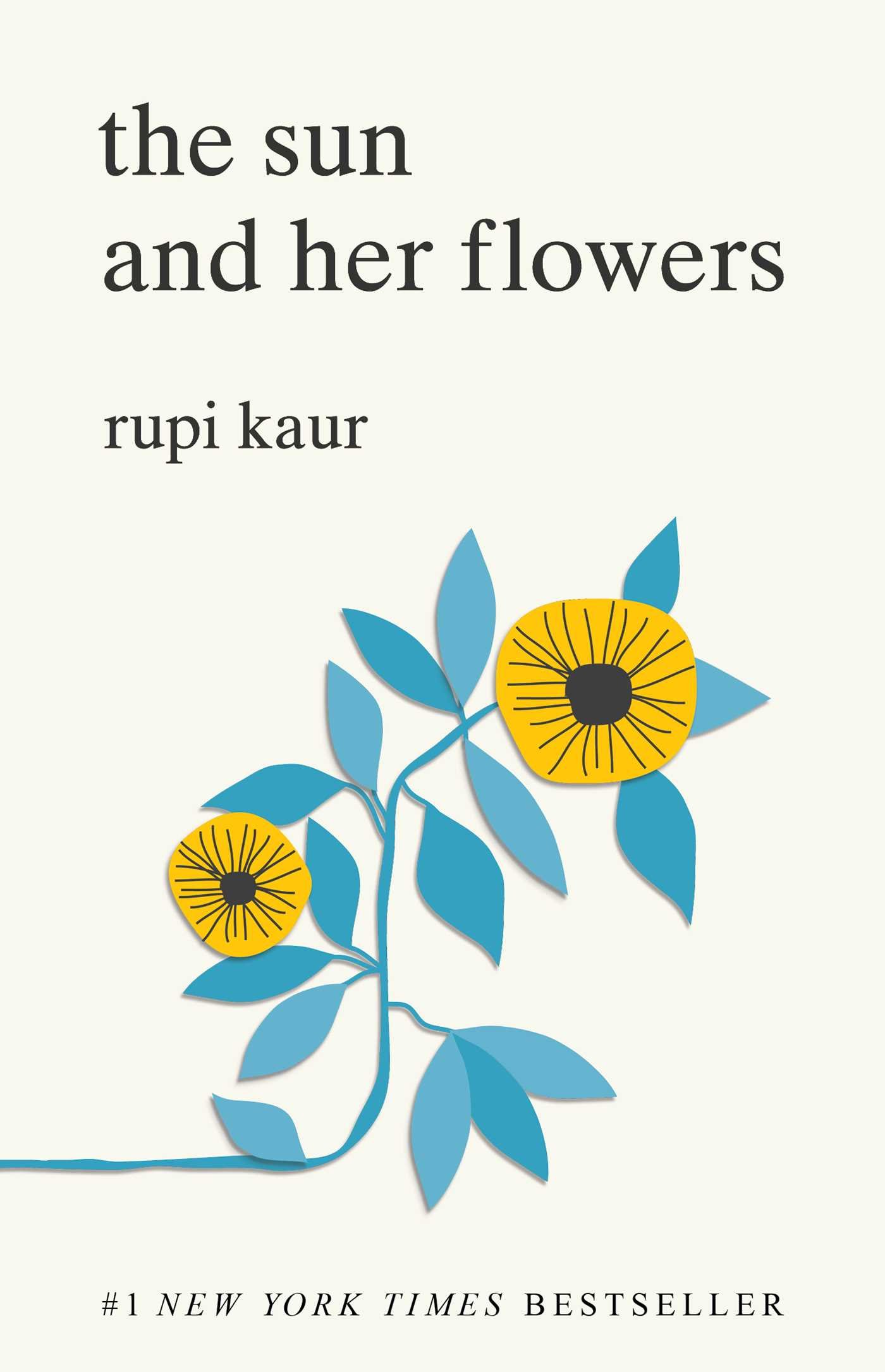 Today I am here to write about a book that I have recently completed, the one and only, The Sun and Her Flowers. A 256 page poetry book, published on October 3rd 2017 by Rupi Kaur. Kaur was born in Punjab, India and emigrated to Canada with her family at the age of four. Her mother brought the love of art upon her at a very young age, which resulted in her illustrating,  writing, and publishing both of her books, Milk and Honey, and The Sun and Her Flowers. While these two books are her only main stories that she has written and published, she has also created several coloring books that include short poems. Although Kaur’s career is young, and she only wrote her first book, Milk and Honey, at age 21, she had already received the Goodreads Choice Awards Best Poetry award. The book, Milk and Honey, has received a tremendous amount of popularity in the past year or two. I did hear that this book and that Rupi Kaur is a very big advocate for feminism. While I do believe in equality for everybody, I just haven’t been interested or involved in the topic, so I certainly did not expect myself to want to read this, but I also heard that this story involved many more issues such as depression, insecurities, worth, anxiety, and so much more than that. So, one day when my friends were discussing this book, I mentioned that I have never read the book even though I had the desire to. Little did I know that my friend owned Milk and Honey and the second book that I didn’t even know existed, The Sun and Her Flowers. I do know that Rupi Kaur’s first book is extremely controversial and that some important people reading this may disapprove of children my age reading that book. So, I have decided that the Sun and Her Flowers would be a bit more age appropriate. (Even though people may dislike this book just as much)

The Sun and Her Flowers is a collection of hundreds of different poems written in first person. The book is separated into 5 chapters: The Wilting, Falling, Rooting, Rising, and Blooming. While the character remains anonymous, it can be easily assumed that Rupi Kaur is talking about herself, considering that she mentions her Indian heritage and other subjects that probably could only be written about if the author has experienced it first hand. This woman has inner demons that she has been trying to escape for a long time. They were introduced to us in Milk and Honey. She seeks to free them and to free herself, but whenever she attempts to, her past events get in her way. This character has been traumatized from many events, including sexual assault, mental abuse, and many other things that can truly change someone for the rest of their life. These events have made it hard for her to trust anybody. But she seeks for an escape or for someone or something to save her. So when she finds love, in the beginning, it is the best thing that has happened to her. But after time, she realizes that she believes that she is receiving her worth from someone else. Words cannot describe how unhealthy this makes relationships. Because everybody needs to find worth in themselves, you cannot receive worth from anybody. But without love she feels empty and broken. This book reaches so many different topics which is why it’s important to break down each of the five chapters.

The Wilting: In the beginning she is unmasking her vulnerability after her breakup. She seeks to find herself and who she truly is. And after a part of her has been taken away and has been lost, there’s a feeling of needing to overcome the heartbreak but feeling too weak to even fight any of your battles at the same time.

The Falling: The is a feeling that hits you like a truck. It’s crashing when you thought you already hit rock bottom. The feeling is so sudden and so intense that you just feel hopeless and useless. Like the hole that you’ve fallen into is too deep and you ask yourself if it’s even possible to ever escape.

The Rooting: This is one of the early stages of growth. You need to gain confidence and self worth but it’s hard to recognize it when you’ve never experienced it in the first place. Someone like this character has been taught that to be humble or to be modest means that you have to be self deprecating at the same time. So you look for other resources to find some familiarity in self confidence.

The Rising: Rising is starting from the worst possible place you could ever be in and learning to grow. Its starting from rock bottom. Starting from the ground and building yourself up. Teaching you that there will be such a great amount of setbacks that would make anybody feel so defeated. But also knowing that it will be so worth it at the end.

The Blooming: Blooming is something that everybody can relate to. It’s looking back at what you’ve done and what you’ve completed. Knowing that you can still get better and that there is still room to grow and improve. Maybe the expectations are set too high…but still having the ability to acknowledge and reflect on everything that you’ve done.

I’ve noticed how realistically Rupi Kaur described depression and subtly included things that many people may have not noticed, but it made this book so real and applicable to everybody. During the rooting chapter, Kaur wrote:

down to their knees today

police shot people dead for the color of their skin

lose both her child and her mind

how can i refuse to believe

my life is anything short of a miracle

if amidst all this chaos

i was given this life

There are tons of poems written like this in The Sun and Her Flowers.  Here is another poem that is similar

the way you speak of yourself

the way you degrade yourself

There are so many lessons that could help so many people coming from a character who needs help themselves. A character is saying things to the reader that try to convince us that we have worth. Saying powerful words to us. But at the same time, there a poems written like one during the falling chapter:

when i woke up

the sun fell to the ground and rolled away

all that’s left alive here is me

– depression is a shadow living inside me

That poem is one that really hit home for me and I can only imagine how others felt about it. The truth is that people suffering like this character are the best at saving others but are terrible at attempting to save themselves. Sometimes it’s because they feel so worthless that they don’t think they deserve the feeling of being happy. Sometimes it’s because they don’t want to. Because depression is something that is someone’s enemy, but also someone’s friend, because sometimes it’s the only thing that is constantly there for them. Or because at some point, you realize that nobody wants you…but the worst part is that you don’t even want yourself. So you’re stuck in a situation where you have learned so many lessons that could save so many people. But for some reason, it can’t save you.

This story truly made me think about so many of these issues that millions of people have to suffer with every single day. Not just issues about feminism or race. It made me think about everything. I do believe that everybody has dealt with something. Not something like your parents wouldn’t let you go out on one night or you weren’t about to buy a certain outfit for a certain day. But everybody has bumps in the road. Maybe whoever is reading this right now hasn’t reached theirs. I know I have. I’ve hit many. And I know that there are still going to be so many more curve balls thrown at me. I also know that whatever I, a privelleged teenage who is living in an amazing town and is being handed thousands of opportunities everyday, am going through, it probably cannot compare to anything that some people living in one town over are going through. But as human beings, we look for ways to compare and relate to others. For example:

i do not weep

because i am unhappy

I weep because i have everything

yet i am unhappy

I chose this poem because I think that this is something that almost every single person can understand. Most people can not understand this from Kaur’s point of view. Most people do not have experience with sexual assault and racial issues and mental abuse. But what defines everything? Is everything just having food on your table and a roof above your head? Is everything being able to receive an education? Is everything getting the newest IPhone? There are millions across this world that can say that they have “everything” when compared to another million they have nothing. This just makes me think so thoroughly about my surroundings and helps me think about all of the other sides to a story that I do not see.

The last thing that I loved about this book was how something can be so simple yet have so much complexity at the same time. When you think about this book you think of the overall simplicity and how aesthetically pleasing it is. The read itself is quick and easy. The longest poem was  only about 3 pages so you could only imagine how long it took to read all 256 them. So, with that being said, sure…the book is simple. But if you read this book in 30 minutes, you won’t be able to comprehend anything. The Sun and Her Flowers is a book that you need to read slowly and stop every once in awhile to be able to ask yourself questions about what your reading. This is what I did when reading poems like these:

and the new day came

the show must go on said the sun

life does not stop for anybody

Why are you so unkind to me

The things I love about these poems are how short and straightforward they may seem but how much meaning they hold behind them. Not a single person can just look at these and understand what Rupi Kaur was trying to say. I don’t even think somebody can fully grasp what she was trying to say after reading it 100 times. Everybody holds their own story behind every word that they are saying. And that’s what makes writing so beautiful.

I am so incredibly glad that I had the ability to read this book. Before picking this up, I would have given an easy no to any poetry that crossed my eyes, but this definitely made me seek to expand my knowledge in this genre. This beautifully written book deserves a 9 out of 10.

8 thoughts on “Tessa Pavia’s Letter Essay #4: The Sun and Her Flowers”