Letter-Essay #5: Crispin The Cross of Lead 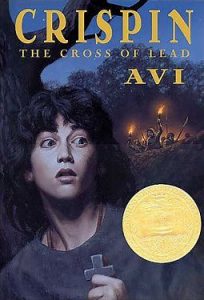 “Crispin the cross of lead” is a 262 page Historical Novel by Avi. Avi is his pen name, a pen name is a assumed name taken by the author. His real name is Edward Irving Wortis. He has written two more books after “Crispin the Cross of Lead”. “Crispin: At the edge of the world”  and “Crispin: The end of time.” I plan on reading these two books and write about them for my next letter essays. He has published over 75 books, when i first saw this number i thought the site i was on was a fake, but after more research it turns out to be true. Like how is it possible to right 75 books that all seem really good.  I am surprised that i haven’t heard of him. I plan on reading a lot of his books in the future.

Asta’s son is the mains characters name. He is a single child who has lost his father to “The Black Death.” His mother’s name is Asta. He and his mother face a life of torment, he is poor without any money. He has nothing but god to believe in. Early in the book his mother dies, Even in death, his mother is shunned no one kneels when carting the body to the burial site. After the burial, he has only his cross of lead that was given to him by his mother. He feels that he has nothing more to lose. After his mother’s death he is accused of stealing from John Aycliffe the leader of the town. He is proclaimed a wolfs head or none human he can be legally killed  by anyone and their would be a bounty for him. He has only one person he can trust in the town and that is the priest named Father Quinel. The priest told him his real name. He was supposed to tell him something  the next day he was killed. Crispin had to run  away fearing that he would be captured and killed. This is where his life take a turn in a bad or good way it is up to you to find out. Read.

This book was something different. Many of the books i have reached has a main character followed by death and failure, but this. This was different while reading it i felt a sort of desperation. Something i had never felt before. I just wanted, no i needed something good to happen. This poor kid haunted by the death of the two closest people in his life.  Why i thought, he has been living off nothing he has to make a living off nothing. He is left with nothing, but he still went on after he left the town. He has no hope of success but why does he still trudge on through this life why don’t just leave it. Just leave yourself to god. You have lost everything isn’t there no point in living anymore.

I was surprised when i was reading this book and it was all “pray to god” “let god help you.” This book made me think about belief and religion. This kid who has lived a horrible life, why doesn’t god do anything. “Oh, it is a trial for the person to see if their faithful.” Isn’t god supposed  to be merciful help those who are faithful. It makes you questing is there even a god. Now i am a muslim. I believe in god i go to sunday school every  sunday to learn about god and his prophets, but is it wrong to question if there is a god. This book got me to think about questions that i never wanted to deep thinking about.

I rate this book a 9/10 it really got me thinking and it was just really good book. I don’t usually read other genres but fantasy but this was a nice change. I plan on reading the next two books before the next letter essay. So if you want to hear my opinion on them. You will be waiting until i have my next letter essay due.

4 thoughts on “Letter-Essay #5: Crispin The Cross of Lead”