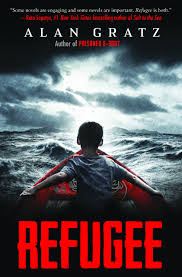 In December, I finished reading Refugee by Alan Gratz. Refugee is a 338 page novel that could be considered both historical and realistic fiction. Alan Gratz is the  New York Times bestselling author of a number of novels for his readers. His books are  mostly geared towards young adults. His very first novel was Samurai Shortstop, which was honored as one of the ALA’s 2007 Top Ten Best Books for Young Adults. Gratz was born and raised in Knoxville, Tennessee. He attended the University of Tennessee and earned a College Scholars degree which specialized in creative writing.

When we were in ILA class, our teacher showed us a few books that we could by in the book sale at our school. One of them was Refugee. When he read us the back, it sounding insanely intriguing. When the book fair came around, I realized that I had just enough money to by the book. I bought it, and started reading, and I couldn’t put the book down. Each chapter ended with a cliffhanger and there were so many problems that you began to really understand the characters and their life and thought process.

In Refugee, there are three kids, all different. Isabel is a Cuban girl living under Castro’s rule in 1994. It was just her, her parents, and her Papi(grandfather). But when riots break because citizens can’t leave the country full of poor conditions, her father could get arrested. However, when Castro decides to let citizens leave, if they want, her family takes the opportunity and decides to leave, with the help of some neighbors. Her mission? Get to America. But when storms and inevitable issues occur, they worry that they’ll fail. With a pregnant mother on board, they need to get there  as soon as they can, and safely.  Their raft adventures continues until the last second. Mahmoud is a boy living in Syria in 2015. When his hometown in attacked, he and his family starts the journey with a newly born baby coming along…There goal is to reach Europe, but to get there, him and his family have to travel on war zones and dangerous waters. Their journey is full of risks, and one that saved a girl, but which took her from everyone she knew.  Josef is living in the 1930’s in Nazi Germany– as a Jew. Right before they left, Joseph’s father was taken away to a Nazi camp. They only released him upon the rule that he would leave the country as soon as they could. Live is going against all three of these kids, but they hear about the challenge and accept it. Their adventures are full of scandals. Danger. Sacrifice. While families are being pulled apart, their stories come together  in the most amazing and yet unexpected way.

In Refugee, there were three main characters, and each of them have their own personality and story. They all gave up their lives to find safety in a new place. Isabel lived in Havana, Cuba. It was just her, her parents, and her Papi(her grandfather). Isabel is very musically talented. In the book, she plays trumpet to collect money for her parents. The only people she gets pesos from are tourists, but it’s still a little effective. She has a very caring heart. She gives her rations to a poor, starved kitten she found. And yet she was starving– thin and hungry. She’s 11 years old, and with the conditions she lives in, insanely optimistic. She’s mature, outgoing, and ready for adventure. Mahmoud is surviving in Aleppo, Syria during the war. If he and his parents hadn’t decided to leave, they would’ve been trapped in a war zone. Mahmoud has a younger brother named Waleed, and a baby sister named Hana. When the war started, he began to stay in the shadows, and that was just the way he lived. Once upon a time, he did have friends, and he wasn’t always in the shadows. One in particular was very close to him. But then he died, and that changed him forever. However, I think that this change just developed Mahmoud more, as a person. The last character that I learned about was Josef. He has a younger sister named Ruthie, and before he leaves to escape, he lived in Berlin, Germany. One thing that stood out to me about Josef was that he was like REALLY family dedicated. When time came to make decisions, he always put family first.

I really liked how the author made it so that Waleed, Mahmoud’s little brother, was based off an actual boy. In the back of the book, where he talks about the experiences that people went through that these stories were based off, it says, “But Waleed is specifically based on a now-famous photograph of a five-year-old boy from Aleppo named Omran. In the picture, Omran sits alone in the back of an ambulance after surviving an airstrike, his feet bare, his face bloody, his body covered in dirt and gray ash. He’s not crying. He’s not angry. Maybe he’s just in shock-or maybe he’s just used to this. This is the only life he knows, because his country has been at war as long as he’s been alive(335)” I thought that this was really interesting because he was the only character in the book that was based off of someone. He seemed like a really nice kid, but then halfway through the book, he just totally lost all connection, having this zoned out lifestyle. This is a picture of the boy described earlier: 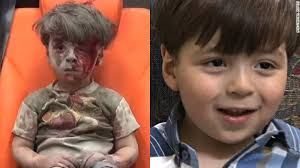 This is how I read this book: I first learned about three characters. I each felt really bad about how they lived. And just when I thought things couldn’t get worse for these character, they did. Mahmoud had to leave his life behind so that his family could live in a place where they were welcomed. Isabel got up and left the second she could, leaving they only place she’s ever known behind. Let’s not forget that she gave up her trumpet so that she could leave. Trumpet was like here soulmate. Josef had to leave so his family wouldn’t die from the cruel rule of his country. And just when you think that things can’t get worse for the characters, they do. Trying no to spoil the story, but one of the has to give a sibling to a stranger so they could have a chance of surviving. One of them has no choice but to watch as her friend dies and her boat practically sinks. One of them is forced to go to the country they left from, forcing themselves into a very, very dangerous situation. Generally, their experiences made my life sound insanely boring. Seriously.

One part of the book that really stood out to me was the end when the characters lives all connected. Rose, as an elder, was telling Mahmoud about her experiences as a kid.

“ ‘I was a refugee once, just like you,’ the old woman said through the interpreter, ‘ and I lost my brother.’ She pointed to an old brown photograph in a picture frame, of a mother and father and two children: a boy about Mahmoud’s age in glasses, and a little girl. The father wore suits and ties, and the mother wore a pretty dress with big buttons. The girl was dressed like a little sailor. ‘ That’s me, the girl. That’s my family(314).’”

This passage really stood out to me because it was when Mahmoud and Ruthie(later Frau) really first connected. This was important to me because as good as the book was, it was just one of the things that you expect from the book, like people falling in love, really liking an enemy, or in our case, a few stories connecting. As we talked about in ILA class, readers set expectations for the end of the book. And when that happens, it’s why we enjoy the book so much. I would rate Refugee a 10 out of 10 because of the outstanding stories, beautiful craft, and just the fact that it really met my expectations. I’m so glad that I chose to read it.

Here is a book trailer: