I’ve recently finished reading The Land, a book by Mildred D. Taylor, and I don’t think I can express how much I loved reading it. It is historical fiction, but is based on true stories from the authors own family history. The book is 369 pages, it is also 1 of 8 books in the Logan family saga series. The author, Mildred D. Taylor, is African American and most known for writing about the struggle of African Americans in the south throughout history. 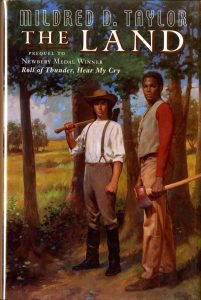 The reason I chose to read this book is because the cover intrigued me, I wanted to know what the title meant, and who the two people on the cover were. I also saw that it had won a Coretta Scott King Award, which at the time I had no idea was a thing.

In the book, Paul-Edward is the child to his Black mother and White father, who currently live on the father’s plantation. Paul has a sister who herself is biracial like him, he also has three brothers who are white and born to a separate white mother. Because he is biracial and can be passed off as a white boy, he is bullied and beaten up by black boys his age that live on the plantation. His biggest bully is Mitchell who is constantly beating him up, when asked why, he says he just wants to. Eventually Paul and Mitchell come to a compromise, because Paul’s father tries to treat him like his white brothers, he is taught the same as them. So Mitchel and Paul agree that Mitchell will stop beating him up if he can teach him to read, he will also in return teach Paul to fight. Paul also has a talent with horse, a special connection, he is able to train and ride any horse no matter how notorious it’s reputation. Paul and Mitchell really become close when Paul lets Mitchell ride his fathers new prized horse, Mitchell cannot take control and accidentally hurts the stallion. Paul covers up for Mitchell and takes the punishment himself, it is the start to their life long friendship. Paul cannot get a proper education because he is African American so he is sent off to a house in Macon to learn the craft of furniture making. When Paul comes back from Macon he sticks up for himself against a white boy, and even though morally wrong, it results in his first whipping as a black boy. Paul’s father wants what’s best for him, he wishes he didn’t have to whip him, but he needs to teach him how cruel the world can be, and that there are worse things than a whipping for an African American who disobeys a white man. After a while, because of Paul’s talent with horses, he, Mitchell, and his father ride to a horse fair where a man asks Paul to race his horse. Even though Paul’s father told him strictly not to, Paul wins the race that he was promised to earn money in. Not surprisingly the white man does not give him his money he was promised and Mitchell does something outrageous, he takes the money from the white man. In the time period, doing this was a direct result in a lynching. Paul cannot let this happen so they hop onto a train and hide with the help of friendly white women, he has no choice but to leave everything behind. Little did they know they would go deeper into the south where life would be harder for them, as black people.

I wish that when Paul got onto the train he went back, I know he would face so many consequences but something in me was deeply saddened that he would never see his family again. “I found myself crying. No sound came, just tears. I couldn’t afford to be heard; still, I cried. I knew a part of my life was passing now, a part of my life I would never know again, the part of my life that was my daddy (pg. 126).” The reason this part of the book hit me so hard is because I could never imagine having to do that to my own father, I love him so much. I felt so much sympathy for Paul-Edward, that is the hardest thing he would probably ever have to do, and he deserves a medal for the courage he had. It shows how good the author is, she has the ability to touch the reader’s emotions.

I was very angry when after months of chopping trees, Filmore Granger went back on his word and took away the land that Paul’s contract promised he would get title to. “I stared at Filmore Granger, then I glanced over at Caroline, watching, and I tried to hold on to my temper, to do what was best for her. I didn’t want to let my words spew out like I felt like doing (pg. 342).”

What Filmore Granger did not only angered me, but I felt so bad for Paul. He had put his blood and sweat into cutting down 40 acres of trees so he could get title to that land, but Filmore took it away from him. What angers me the most is that Filmore can go against a contract because he is white, but Paul cannot even speak up for himself without punishment.

I was especially moved by the ending of the book, it took everything in me not to cry in school while finishing. I think this only proves how good of a writer the author really is, it is a perfect example of how brilliant the book is. The way that she resolved everything and brought the story to a close was impressive, while reading the book I would constantly ask myself how problems this big would be resolved. But after finishing this book, I have no doubt that the author is a talented genius.

After Paul walks on foot to his destination which is a lumber camp, he sleep and wakes up on a random plot of land owned by a man named J. T. Hollenbeck. “I was awed by what I saw. All around me was emerald green, and above that, God’s own bluest skies, blessed only with two or three perfect rolls of pillow-like clouds. I trod down a slope, to a glade that held a pond at its center. A fallen tree lay beside the pond, and I sat upon it as the morning light slit through the trees and shone everything golden. For the first time since I’d left my daddy’s land, my heart soared, higher than any mountain I’d ever imagined, up to God’s own perfect clouds, and I felt a peace come over me (pg. 159).” This is my favorite passage because it very effectively describes how much passion for land Paul really has. It is also very descriptive and easy to imagine, it is probably the most easy to visualize part of the book.

After reading this book it is now my favorite, at least for now. I would give this a 10/10, I am looking forward to reading the other 7 books in the Logan family series.